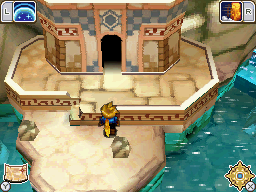 The Harapa Ruins (ハラッパー遺跡 Harappa Ruins) are, as the name suggests, ruins located in Harapa. The ruins are initially inaccessible, but reactivating the Alchemy Forge sends water flowing through Harapa, opening a path to the ruins. The ruins must be cleared to acquire the Ice Queen Stone. 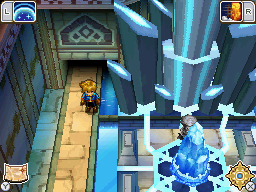 The main chamber of the underground Harapa Ruins includes a large crystalline structure that reaches up through the settlement's surface and provides Psynergy-based power to the buildings. The Ice Queen and her hapless subject await at the center.

When you first arrive in Harapa early in the game, the first, exterior screen of Harapa Ruins north of that is dried up, and the structure at the north end cannot be reached. The only thing that can be reached here is the Mars Djinni at the northeast corner of the screen. To reach this, go into Harapa's sanctum and step out onto its elevated balcony. Go to the lit torch just northwest of that and cast the Douse Psynergy on it to put it out, therefore allowing you to hop over it. Follow the linear path north into Harapa Ruins' exterior screen and go straight up along the wall to the Mars Djinni Cinder, which joins without a fight.

Much later in the game, when you are tasked in Passaj to go to Harapa Ruins, return to the exterior screen, which is now filled with water. This allows you to access the structure at the north end; hop northeast across the logs in front of you, then hop northwest the rest of the way to the north structure. Inside, go down to and stand on the large Zol cube, which is an elevator that lowers you all the way down in Harapa Ruins B3. In this new watery room, there are two forks down; take the right fork down. In the subsequent room with a river that runs straight through it, cast Growth on the plant, climb it, then head down, hop over the puddle, then cast Cold Snap on the puddle to turn it into an ice pillar. Growth the other plant so that you can hop left across the ice pillar and walk across the gate, and cast Move on the statue to the left and drop it into the water so you can hop to the elevated left portion of the screen. You can now get to the chest at the northwest corner of the screen, which contains your next strong weapon artifact, the Mystery Blade. Slide down the cliff slides, then take the lower left exit down.

The main segment of Harapa Ruins is a series of rooms that extends across the entire map screen, and is filled with ice that makes you slide uncontrollably. Enter the door to your lower left, and in the next room, step on the switch to open a door down. Proceed all the way down to the southwest corner of the map area, and walk right along the path above the ice to reach a pair of chests containing a Lucky Pepper and the Bone Armlet. Go back left and slide across the ice to reach the southeast corner of the map screen. Enter the door to the left of the downstairs to reach the center-right part of the map screen, and move the statue three tiles left so that it falls onto the ice. This way, you can slide the ice upward to bump into the statue, then slide left into the central ice maze. Once here, slide up, right, down, left, up, left, down, right, and down. 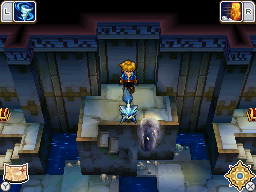 You will immediately be taken down to the long and narrow Harapa Ruins B4, where you can immediately battle and earn the Mercury Djinni Serac, one of the best attacking Djinn in the game. Slide down the cliff slide, and you can easily reach both chests in this room - the right one contains a Crystal Powder and the left one contains the Viking Helm. Take the upstairs to emerge back at the southeast corner of the main map screen, and go back up and slide up and left to return to the main ice maze. This time, slide up, right, down, left, up, left, up, right, and up.

When you approach the large ice crystal, a cutscene triggers where you need to first answer no, and then yes, in order to fight the Ice Queen boss. When the boss is defeated, follow-up cutscenes give you the Ice Queen Stone, a utility psynergy item that lets the equipped Mercury Adept cast the Cold Snap Psynergy series. All the ice around you will become water, so you will need to cast Cold Snap on the puddle in the center of the design to turn it all back into ice. Now slide down and right; you can enter the door near you to access the northeast corner of the map screen, but there is no point in doing so, so go through the exit northwest of that, step on a switch to open the door, and take the elevator back to the surface. As you leave Harapa Ruins and return to Harapa, more cutscenes trigger, and it will be nighttime. You will need to rest in the inn in order to leave Harapa.

Items found in Harapa Ruins include:

At some point before Dark Dawn, Nyunpa had an encounter with the Ice Queen, who managed to subjugate him. Using Nyunpa as her mode of transportation, the Ice Queen found her way to Harapa, where she uses her power to partially restore the ruins and power the ancient city. However, she intentionally holds back some of her power to prevent complete restoration.

Once the Alchemy Forge is activated, the Forge further powers up the Alchemy Well, bringing back water to the entire Ei-Jei region, including Harapa. Matthew's party enter the ruins to "enlist" the Ice Queen's power in order to reach Craggy Peak. After defeating her and retrieving her gemstone, the ruins temporarily shut down, as indicated by the crystalline structure nearby going dark. The ruins are quickly reactivated by Matthew and Nyunpa, who is freed after the queen's downfall, by using the gemstone's power to refreeze the ruins thereby fully restoring Harapa.

Spoilers end here. Those who did not want the plot ruined for them may now continue reading as normal.
Retrieved from "https://goldensunwiki.net/w/index.php?title=Harapa_Ruins&oldid=62400"
Category: