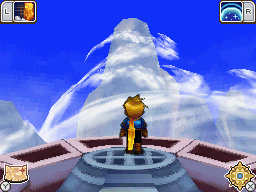 Craggy Peak as seen from the cloud platform in Passaj.

Craggy Peak is part of the Khiren Mountain Range, and appears to be one of the largest mountains in the area. It is located in the center of Angara, and can be seen from Passaj. It is also the site of an important dungeon: the Craggy Peak Ruins. Arriving at Craggy Peak serves as a point of no return, preventing the player from returning to the Clouds of Passaj. Access to the mountain itself is cut off following the activation of the Grave Eclipse, as the player is prevented from reaccessing the Clouds of Passaj. Craggy Peak's Encyclopedia entry reads as follows:

"This mountain was once home to the Neox. Their ancient but highly advanced civilization created many remarkable devices. The Neox were wiped out when Alchemy was sealed away. Their legacy lives on in the forms of ruins that dot the mountain."

In ancient times, Craggy Peak was home to a tribe of Jenei known as the Neox. The Neox were ancestors of modern-day Adepts, and were closely allied to the Exathi of Ei-Jei, a race of skilled craftsmen. To travel back in to their home, the two races collaborated to build the Alchemy Forge, which controlled access to the Clouds of Passaj, which served as the mode of transportation between Craggy Peak and the Exathi town of Passaj. After the Neox died out following the sealing of Alchemy, access to Craggy Peak was cut off, as the non-Adept Exathi could not work the Alchemy Forge.

During Dark Dawn, Matthew's party of Adepts reactivate the Alchemy Forge, as it controls the only passageway that leads over the Mountains. Activating the Alchemy Forge allows them to cross the Clouds of Passaj and travel to Craggy Peak. Upon arriving, they come across the abandoned Neox ruins. After solving the puzzle's located within, Matthew's party is able to hike down the mountain into the Khiren Glacier region.