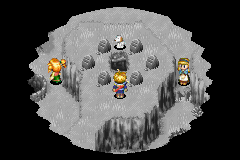 At the circle of gravestones at the south portion of Vault, cast Reveal to find the entrance into Vault Cave. Giving a Bone to the dog is entirely optional.

Vault Cave (クープアップの洞窟, Kūpuappu's Cave) is a cavernous path located underneath the town of Vault in Angara, and is an optional dungeon in Golden Sun. It can only be entered later on in the game once Ivan has learned the Reveal Psynergy, which is necessary to perceive and enter the entrance hidden in the cemetery where the dog is. Its biggest reward is the Venus Djinni Sap, but to get this, you must first ring the bell at the north end of town to scare it onto the elevated cave exit at the northeast corner of the town area.

While Vault Cave has no background information and no relevance to any of the plot, its existence is spoken of in rumor even in towns separate from Vault. Early in Golden Sun, when the eruption of Mt. Aleph transpires and Vault's townspeople panic, the Vault gang of thieves go on a stealing spree, and while some of the stolen goods are hidden in the loft of the Inn, others are stored away "in the cemetery" that is where the entrance to Vault Cave lies hidden, perhaps indicating that the cave was temporarily used as a cache. After the thieves' arrest, the townspeople discover and bring back all the items from the cemetery, but it is possible that the Vambrace found deeper in the cave is one piece of stolen armor that was not recovered. 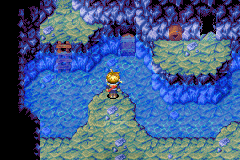 Vault Cave features a puzzle based around a floodgate, which the player must drain to pass through the dungeon.

The entrance to Vault Cave lies in the center of the ring of gravestones at the elevated south portion of the town, where the dog lies around, and using the Reveal Psynergy in the area makes it easily entered. While the entrance can easily be entered where the dog is currently situated, the idea is to Mind Read the dog first, which will bribe you with useful information if you give it a Bone from the first floor Inn. After using the Bone item on it, it will move up two spaces and telepathically tell you that "A careful search will reveal a passage leading underground nearby", with the word "reveal" emphasized with a delay in between its appearance and those of the words before it and after it. Do NOT enter Vault Cave yet; before you do so, go along the town's elevated perimeter counterclockwise until you climb up to a wooden watchtower, and interact with the bell at the top; this will cause a Venus Djinni to jump out of the nearby tree and land near an elevated cave exit, which is the exit of Vault Cave. Doing this will cause the Djinni to be your reward when you complete the dungeon.

Climb down the ladder and go into the first room, which has branching paths; take the right path to the immediately visible chest to the upper right, which will reveal itself to be a Mimic when you inspect it; defeat it to earn a Vial. Now take the left fork into the next room, and go down the only stairwell to the right. You will end up at a small room where a lit torch to the lower left can be pretty obviously pushed onto the fireball-styled floor tile to the left of the closed gate. Do so and proceed to the next room.

The next room has lots of Frost-able puddles on the lower ground, but before doing anything with them, go up and cast Whirlwind on the green bush, which leads to a chest containing the Vambrace glove artifact. Now cast Frost on all of the puddles except the rightmost one (which is irrelevant) to construct a hoppable path that lets you enter the doorway at the upper left end of the room. In the twisting room you next enter, go down the ladder you immediately see to your left, and let that path linearly lead you to a small room that has a stairwell going up and a stairwell going down. Go up the up-stairs stairwell to get to a spot where you can press a switch on the wall, which will cause a body of water to empty out into the room you were in shortly beforehand. Then go back downstairs and take the downstairs stairwell. 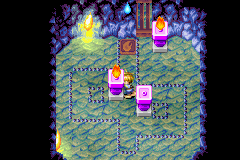 Push the lit torch without the dripping water from above putting it out so that putting it onto the fireball-styled floor tile will make the gate open.

You will end up at a rather complex room with three torch pillars, two of them lit, and a series of water drops constantly dripping from the ceiling; the idea is to move the lit torch pillar onto the floor tile to the left of the closed gate without the dripping water putting the torch out, lest you have to leave the room south and come back in to perform a puzzle reset. First, move the unlit torch pillar two spaces down and one space right, then move the lit torch up one space. Now try to memorize the pattern at which the water drops fall; at each tile water drops onto, there is enough time for the lit pillar to be pushed through the tile with two pushing movements (exactly 3 seconds). Basically, as soon as/right before you hear the drip sound of the water drop to the lower right, push the lit pillar right three spaces. Then push the pillar two spaces up and two spaces left. Then, as soon as/right before you hear the drip of the water drop just to the left of your lit pillar's current position, push it left twice. Now push the pillar down once, left twice, up twice, and right once, and as soon as/right before you hear the drip of the upper left water drop, push it right twice. Now just push it up twice to place the lit pillar onto the floor tile and open the gate, and go up the stairs.

Back at a room where you were in earlier, but with the lowered ground to the lower right now visibly filled with water, go left and up the stairs at the upper left corner, and follow the subsequent path down to the room where you originally emptied the water out of. Enter the lower-floor doorway through which the water was emptied through (just to the lower right of your position), and in the subsequent room, hop the gap and climb up right to go up some stairs. You will pretty quickly be led back outside in Vault, at the elevated cave exit; if you remembered to scare the Venus Djinni out of its tree earlier by ringing the bell, it will be on this "elevated island" for you to collect, and you will have earned the Venus Djinni Sap. Reenter the cave and simply cast Retreat to return to the ladder at Vault Cave's entrance, and climb back into Vault.