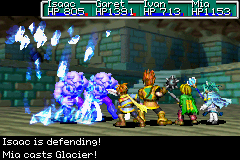 Mia casting Glacier, the most powerful stage of the Frost series.

Frost (チルド, Chilled), Tundra (チルドアース, Chilled Earth), and Glacier (チルドマウンテン, Chilled Mountain) are a series of Mercury attack Psynergy featured in Golden Sun and Golden Sun: The Lost Age. The first entry in the series, Frost, is also a necessary Utility Psynergy in both games, and can be granted to any Adept via the Frost Jewel.

Frost, Tundra, and Glacier are offensive, ranged Psynergies. The final amount of damage is determined by comparing the user's Mercury Power to the target's Mercury Resistance and using the difference to modify the base power of the particular Psynergy in use.

Elemental Power attacks such as the Frost series use a set base power as the base damage to be modified. For example, the base power of Glacier is 100, meaning an unmodified Glacier would deal around 100 points of damage.

Glacier's attack takes this base damage value and uses it in the following equation:

To word this in prose, The Frost series takes the base damage of the particular attack, and then modifies this by how much higher or lower the user's Mercury Power is than the target's Mercury Resistance. The difference between the user's Mercury Power and the target's Mercury Resistance is then divided by 200, then 1 is added to this, resulting in what can be called the "elemental damage multiplier". This number is what the Psynergies' damage is multiplied by.

For example, if an Adept with a Mecury Power of 150 casts Glacier on a monster with a Mercury Resistance of 50:

Therefore, a Glacier cast under these circumstances would deal approximately 150 points of damage to the targeted enemy. Since Glacier is a ranged Psynergy, adjacent targets take a percentage of the total damage, with the percentage decreasing as distance from the main target increases. 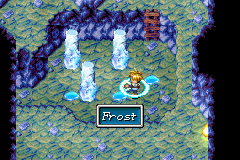 Frost can be cast on small puddles of water to create large pillars of ice.

In both Golden Sun and Golden Sun: The Lost Age, Frost is a common Utility Psynergy integral to solving many puzzles. Frost's most common application is to freeze small puddles of water into large ice pillars. These ice pillars are generally used as a mode of transportation; the player can jump onto and off of these pillars just like any stone pillar. It should be noted that in most situations, the only way to reverse the effect is to leave the room, and re-enter, which causes the pillars to return to puddles of water. While both available Mercury Adepts know Frost in their base class, the Frost Jewel allows any Adept to learn Frost.

General: The Frost series is a fairly weak series, learned early in an Adept's development. While useful early-to-mid-game, it quickly loses power when compared to other series. At the same time, it is efficient, as the player will generally not experience enemies in groups large than 3.

Golden Sun: Initially, for Mia, Frost is strictly inferior to Ice in battle, in that both are available when she joins and both cost 5 PP, though the latter does more damage. However, due to the large level requirement for Ice Missile, Glacier is probably going to be Mia's strongest multi-target Psynergy in the first game, which makes it quite useful.

Golden Sun: The Lost Age: In comparison to Mia, Piers has a larger pool of offensive Psynergies to to choose from overall. Glacier will be used interchangeably with Supercool of the Cool Psynergy series, as far as multi-target attacks go. Meanwhile, Piers also has access to Diamond Dust and Diamond Berg, powerful single-target elemental physical attacks. It still should be noted that Glacier is going to be the most powerful multi-target Psynergy until Piers learns Megacool at Level 48.