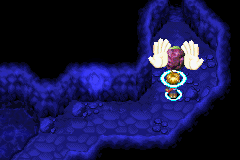 Lift is used on round boulders to elevate them high enough that you can pass under them.

Lift (リフト, Lift) is a Mercury-class Utility Psynergy introduced in Golden Sun that costs 2 Psynergy Points. An Adept can obtain it if he or she is equipped with the Lifting Gem item, which is found in a treasure chest at the bottom of Altin Peak following the boss battle with the Hydros Statue.

Official artwork depiction of the Lift Psynergy, being used by Akafubu.

The Lift Psynergy works on any rotund boulder roughly a little over the size of your main playable character: It will be lifted up high enough in the air that you can now pass under it, and that boulder will stay suspended in the air even if other similar boulders in the room are Lifted. All boulders that have the Lift Psynergy used on them will remain afloat until you leave that room and return.

The Lifting Gem will be in Isaac's party by the time he joins Felix in Golden Sun: The Lost Age, and there are still plenty of uses for it. Boulders located in Treasure Isle, Magma Rock, Shaman Village Cave, and other places are important uses of the Psynergy, and a boulder you can lift in SW Atteka Islet will lead you to a Jupiter Djinni Isaac's party may be missing for whatever reason when they join Felix.