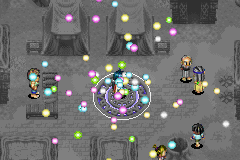 Teleport is used in conjunction with these circle patterns to transport you to the game's most guarded secrets.

Teleport (テレポート, Teleport) is a Jupiter-class Utility Psynergy introduced in The Lost Age that costs 3 Psynergy Points. An Adept can obtain it if they are equipped with the Teleport Lapis item, which you find in a treasure chest in the last "normal" dungeon-style location in the game, Mars Lighthouse.

The Teleport Psynergy has two immensely useful functions. On the overworld map, it allows the party to instantly warp and appear in front of one of the many major towns previously visited in the second game, cutting down traveling time immensely. Using Teleport on the overworld map also brings your ship along for the ride and parks it at the nearest landing site at sea. It will never place the ship in dry land. In environments such as dungeons, it is to be used with circle patterns on the ground that cause you to teleport to new areas. Compatible patterns appear in Mars Lighthouse, Islet Cave, Contigo, and Yampi Desert Cave.

Alex uses a variation of this Psynergy, which is referred to as Warp. However, he does not have to use circles for this and can apparently use it at any time he wishes, wherever he wants. It does only seem to take him short distances however, as demonstrated on Mercury Lighthouse, where he had to warp twice with Saturos.

In Golden Sun: Dark Dawn, Blados and Chalis appear to use a similar effect to warp occasionally. It is not known if this a Psynergy, if it is connected to Alex's own warping technique - which he also uses in the game - or whether either version is specifically connected with the Tuaparang.