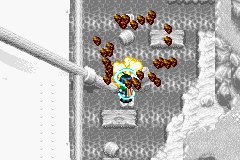 Burst is used to destroy or damage cracked objects like the boulder pinning down the mast of the sailing ship at Alhafra.

Burst (バースト, Burst) is a Mars-class Utility Psynergy introduced in Golden Sun: The Lost Age that costs 2 Psynergy Points. An Adept can obtain it if he or she is equipped with the Burst Brooch item, which is found at the peak of Tundaria Tower.

The Burst Psynergy, in a non-battle environment, has a destructive effect on anything that visibly has cracks in it, which is integral to solving puzzles. A cracked wall can be blown apart and effectively removed with Burst, just like any object that has visible cracks on it. It is used in many instances throughout The Lost Age, most prominently in Magma Rock, where many of the moai statues react to the Burst Psynergy in ways where they are "charged up" to assist you rather than be destroyed by it.