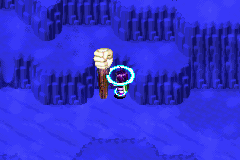 Pound (プレス, Press) is a Mars class Utility Psynergy introduced in Golden Sun: The Lost Age that costs 2 Psynergy Points. An Adept can gain this Psynergy when he or she is equipped with the Pound Cube, found in Dehkan Plateau early in the game and previously owned by the game's first Mars Djinni, Cannon. The Pound Psynergy summons an image of a white-gloved hand in a fist that is used to "Drive objects into the ground"; some pillars can be effectively flattened this way. The Pound Psynergy is required in many dungeons, such as the Yampi Desert and the Gabomba Statue, and is used to help restore the boat in Alhafra. It is also used in a puzzle that gets the King Scorpion to a place where you can battle it. Like many utility Psynergies, Pound is required to beat the game.