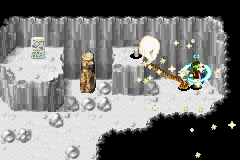 Lash is used only on every untied rope in the game. The rope "paths" you can create can be walked on or climbed on.

Lash (リリース, Release) is a Jupiter class Utility Psynergy introduced in Golden Sun: The Lost Age which costs 1 Psynergy Point. It is added to the Psynergy inventory of an Adept whenever that Adept is equipped with the Lash Pebble, which is found as the quest reward at the end of the Kandorean Temple dungeon. Lash is used to "Lift and move very light objects," namely coiled-up ropes on the ground, where it will automatically tie it up to the nearest tieable pole. The stretched-out rope can then either be walked on like a tightrope or climbed across. It is required to complete the game and is instrumental in many dungeons.