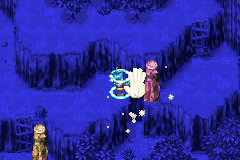 Move is a basic Utility Psynergy that allows its user to shift a nearby object's position a short ways in a compass direction.

Move (ムーブ, Move) is a Utility Psynergy featured throughout the Golden Sun series. It is one of the first Utility Psynergies available to players, and is possibly the most recognizable.

Move is the most common Utility Psynergy: All playable and several non-playable Venus Adepts, as well as Garet, inherently know Move. Unlike many Utility Psynergies, however, nobody else can learn it.

Move costs 2 Psynergy Points to cast. It is a non-combat skill that moves movable items such as standing logs, rocks, and various other things. When cast, a psychic manifest in the shape of a giant hand allows players to move a movable target one space in any of the compass rose directions, provided the target is at the same elevation as the caster. Players are usually able to move such objects by pushing them from behind, but Move has the advantage of being usable from a short distance and moving the target in a direction independent of the caster's location. Many puzzles throughout the Golden Sun series involve moving objects (usually vertical stone pillars) semi-remotely with this skill, making Move easily among the most used Psynergy in the entire series. 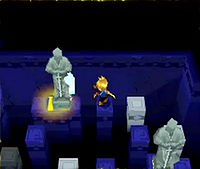 Move's appearance and function is retained in Dark Dawn, but with some altered mechanics.

In Golden Sun and Golden Sun: The Lost Age, Move is considered a Mars-based technique and has a range of two tiles, meaning only one tile of space can be between the target and the caster. It requires a direct line between the target and the caster. It is known inherently by Isaac, Garet, and Felix. In addition, certain Venus Adepts at Izumo, most prominently Uzume, can use Move.

In Golden Sun: Dark Dawn, Move is known by Matthew and Himi and has been reclassified as a Venus spell, likely to reflect that it is primarily learned by Venus Adepts. Move can now be used on any object within a radius of three tiles. Thus, the caster no longer requires a straight line between the caster and the target. The increased range is most prominently shown at a puzzle in the Belinsk Ruins, which requires the player to manipulate a large statue from a distance. 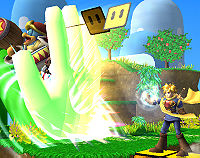 Here, Isaac is using the "Move" technique to push King Dedede off the stage in Super Smash Bros. Brawl.

The Move Psynergy appears in Super Smash Bros. Brawl as the gameplay maneuver Isaac, in his appearance as an Assist Trophy, will perform when he is summoned. Isaac will summon a giant, corporeal gloved hand, glowing green, representing the metaphorical hand that appears in Golden Sun, which will then accelerate forward and push back any opponent character a particular distance. Any opponent character that gets caught up in Move to likely be repeatedly knocked back in mid-air until they are "carried" off the stage, assuming there are no other obstacles in the way, which is quite a powerful in-game effect according to fan consensus. Isaac will perform this three times in succession, with roughly three seconds in between his castings, during which Isaac will turn around if more valid targets are on that side of the screen. The "pushing" effect of Move is a demonstration of an effect in the game's internal mechanics called Set Knockback, which is knockback like it were coming from a fighting character's attack but deals no damage and always sends the victim a certain distance back rather than a variable distance affected by the victim's life meter percentage. Isaac's Move Psynergy has the distinction of being the only thing in all of Super Smash Bros. Brawl that can knock back and potentially K.O. a character under the invincibility-granting effects of the Starman item. 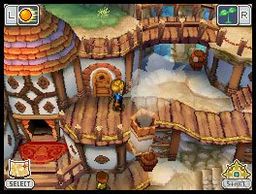 A different icon for Move seen at the upper left of a beta screenshot for Dark Dawn.
Retrieved from "https://goldensunwiki.net/w/index.php?title=Move&oldid=63511"
Categories: