Super Smash Bros. Ultimate is a crossover Nintendo fighting game released on the Nintendo Switch in December 2018, directed by Masahiro Sakurai and developed by Bandai Namco Studios. Ultimate features a massive playable roster from the vast majority of Nintendo intellectual property such as Mario, Pokémon, and The Legend of Zelda, and several third-party companies also contribute characters and IP.

After the Super Smash Bros. installments released for the Wii U and 3DS notably removed Isaac's in-game cameo appearance from Super Smash Bros. Brawl and instead introduced a music track from Golden Sun: Dark Dawn, Ultimate brings back Isaac's role from Brawl with few changes and makes other minor references to the Golden Sun series. This makes Ultimate the first appearance of anything related to Golden Sun to visually appear in a new production since Dark Dawn was released near the end of 2010.

Super Smash Bros. Ultimate provides a modest expansion of the Smash Bros. series' representation of Golden Sun as an IP over what Super Smash Bros. Brawl had featured. While there are no collectible trophies relating to Golden Sun because the concept of collectible Trophies as a whole is removed from the game, Golden Sun receives a relatively disproportionate amount of representation in a new feature exclusive to Ultimate in comparison to other "obscure" IPs and is even the basis for a cosmetic skin.

Isaac returns as one of the dozens of computer-controlled "helper characters" that will be randomly chosen to appear if the player's own character grabs and uses the Assist Trophy item. 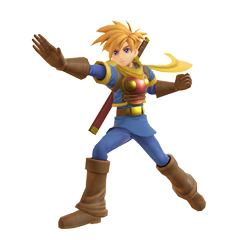 Isaac exhibits an expanded repertoire of behavior in comparison to his Brawl appearance; while he still uses the Move Psynergy (which operates identically to its appearance in Brawl in how it magically projects a large hand that inflicts set knockback to opponents it makes contact with as it propels itself forward) and recycles the same lines of voice acting from Brawl provided by Aya Hara, he now uses several other Psynergy-based maneuvers. Also, like various other Assist Trophies, he can now be damaged and knocked aside like a standard playable character and can even be KO'd off the stage's boundary lines, and if he is sent hurtling away from the stage, he will attempt to return to the stage through traditional means. Furthermore, the playable Inkling character from Splatoon can cover him in ink through special moves as if he were a standard fighter. Isaac can even perform the evasive Air Dodge maneuver.

In one all-new maneuver, Isaac generates a pair of magically projected hands that attempt to ensnare a given opponent of the summoning player and lift the target off the top of the screen, attempting to score a KO off the top boundary line; this at the very least resembles the Lift Psynergy featured in Isaac's source material. The hands produce a unique animation if they fail to grasp an enemy, and characters can break free from their grip through sufficient movement and button input.

Isaac also generates a single magic hand clenched into a fist that slams down on the ground to deal roughly 12% worth of damage to opponents in his way; this mirrors the function of the Pound Psynergy (albeit repurposed as an offensive measure in battle, which is not the case in the source game it appears in). This incidentally gives Isaac the capacity to directly damage playable characters in a Smash Bros. game for the first time.

Finally, Isaac is now given to warping around the stage in order to more reliably land his other moves on opponents. Teleportation is seen in the Golden Sun series either as an outcome of the Teleport Psynergy used in Golden Sun: The Lost Age or as a trademark of another character.

The official render of Isaac's assist trophy role is also featured as one of the several hundred available Smash Tag icons that can be used by players for their online profiles.

Characters from Golden Sun games are represented in the game as among the many hundreds of available "Spirits" to fight and collect in the World of Light adventure mode and other features found within the Spirits menu item. A Spirit, which is visually represented by a piece of static character art, represents an exclusive set of buffs and/or special effects that can be applied to any character it is assigned to, with many spirits being "Support Spirits" only assignable to other "Primary Spirits" in order to provide special properties.

Primary Spirits themselves provide broad statistical enhancements to an equipped fighter's offensive output and survivability while, in most cases, aligning that character with one of three "types" that interact with each other in a rock-paper-scissors mechanic so that characters can become more damaging with their moves against certain opponents and better defended against those opponents' moves — or less so in both cases. (Grab-type Spirits of any strength and level, for example, render the equipped fighter's damage output 30% higher against fighters with Shield-type Spirits, 15% lower against fighters with Attack-type Spirits, and unmodified against fighters with Neutral-type and other Grab-type Spirits.) Some Primary Spirits also apply an extra special trait of their own.

All Primary Spirits can be rapidly leveled from 1 to 99 by either being equipped during battles or being fed acquired Snacks, which increases their overall statistical buffs granted to the equipped character, and a handful of Spirits can each be permanently transformed at level 99 into a stronger Spirit at level 1 that thematically represents a stronger or advanced form of the pictured character. Support spirits are not leveled up. Primary spirits, meanwhile, can be further modified by running them through in-game facilities such as "dojos."

The majority of the Spirits in the game each have an accompanying Event Match-like scenario that can be completed to earn a copy of that Spirit; these always involve at least one of the main playable fighters being specially tuned to vaguely resemble the traits and behaviors of the character pictured in the Spirit, with the stage itself and special environmental modifiers also on hand to reference the Spirit's source material. Whether a Spirit's "Rank" is "Novice," "Advanced," "Ace," or "Legend" denotes its general quality and the scale of its effects, as well as the difficulty of the match associated with the Spirit.

A rather large number of Golden Sun characters appear as collectible Spirits, all of whom are represented by their official pieces of character artwork accompanying promotional materials for the Golden Sun games' releases. These eight Spirits consist of the pieces of character artwork for Isaac, Garet, Ivan, Mia, Felix, and Jenna from the original Golden Sun and Adult Isaac and Matthew from Golden Sun: Dark Dawn. They are assigned official numbers like all of the other Spirits in the game for ordering purposes. In what may be a coincidence, all seven of the distinct characters encompassed within this collection happen to be all seven characters who have been directly controlled by the player outside of battle at some point in the Golden Sun games. Likewise, Golden Sun is the only series to have at least one primary spirit for each of the four types despite not contributing a playable character for the main roster.

Almost all Spirits (besides Spirits representing playable characters directly and "Master Spirits" that exist to provide in-game services on the World of Light's world maps) can periodically and temporarily appear in the Spirit Board feature in real-time for players to fight and collect copies of, and a large fraction of the total Spirits also appear once each as guaranteed encounters in a given save file in the World of Light adventure mode. Three of the Golden Sun Spirits in particular are present in the World of Light; Felix's match appears on the main map ("The Light Realm") in the central-eastern canyon-like area, while Matthew's match appears in the southwest triangle-shaped segment of "The Sacred Land" — a later map resembling the Triforce from The Legend of Zelda. Isaac's match appears in a map explored quite late in the mode, "The Final Battle - Light", and Isaac is one of few spirits in the game that can only be found for the first time in the World of Light.

Because Garet, Ivan, Mia, and Jenna's spirits are exclusive to the Spirit Board, however, it can take players much more time and luck to encounter and earn all four of those without extra expense. All of these spirits except for the Adult Isaac enhancement can also be purchased via in-game currency whenever they are made available; a store called the Vault Shop accessible from the main menu can offer Garet and Mia for 500G each and Felix and Matthew for 1000G each, and Isaac himself can start appearing with a 6000G price tag once the first copy of his spirit has been acquired from the World of Light. A separate shop located in the World of Light named Anna's Emporium (which is thematically dedicated to Spirits of characters depicted as wielding armaments) allows for Ivan and Jenna to be purchased for 500G and 1000G, respectively.

Every one or two weeks or so, the developers run a temporary in-game event centered on the Spirit Board, usually lasting for several days. This usually causes a curated selection of Spirits to both appear more frequently and grant bonus rewards when their Spirit Matches are completed successfully. Thus far, the following events have involved the Golden Sun Spirit Matches detailed above:

Both of the pieces of Golden Sun-related music that were featured in previous Smash games return in Ultimate: "Battle Scene/ Final Boss (Golden Sun)", the progressive rock remix that plays the default battle theme of Golden Sun: The Lost Age before looping the final boss theme from the same game, and "Weyard", the direct rip of the primary overworld track from Golden Sun: Dark Dawn. Beyond these, however, no new music from the Golden Sun series is featured in the game.

Both tracks are included as part of the "Other Series" section of the game's expansive soundtrack. Like all of the other music tracks that populate the label, therefore, the two tracks can be adjusted to play either assuredly or by chance on any of the following stages: Balloon Fight, Duck Hunt, Find Mii, Hanenbow, Living Room, PictoChat 2, Pilotwings, Summit, Tomodachi Life, Wrecking Crew, and Wuhu Island. "Battle Scene/ Final Boss (Golden Sun)" is also the music assigned to each of the Spirit Battles for Golden Sun characters — with the exception of the battle for Matthew, which uses the "Weyard" track instead. Furthermore, the former track is incidentally used for the Spirit Battles for Zael and Calista from The Last Story. 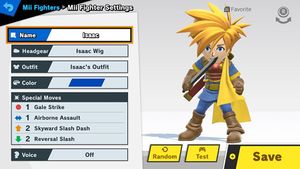 Among the roster of playable fighters in Ultimate are three fighters representing the Mii avatars that prominently featured within the UI of Nintendo hardware and software prior to the Nintendo Switch. Like when they were introduced in the 3DS and Wii U versions of Super Smash Bros., the three playable characters — Mii Brawler, Mii Swordfighter, and Mii Gunner — can have their special moves and appearances customized, and skins representing other video game characters that are not formally playable characters in the game are available as Mii Figher costumes. Among the costumes available for the Mii Swordfighter in particular is a matching set of an outfit and a wig (the "Isaac's Outfit" and "Isaac Wig," respectively) that are both themed after Isaac from Golden Sun, and it can be unlocked without DLC or an extra purchase.