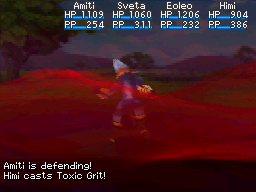 Toxic Grit (ポイズンブロウ, Poison Blow) is a Venus Psynergy introduced in Golden Sun: Dark Dawn. It is nearly identical in nature to the Poison Flow Psynergy, with the main difference being the elemental alignment.

Toxic Grit is an offensive, ranged Psynergy. The offensive power of Toxic Grit is determined by comparing the user's Venus Power and the target's Venus Resistance, and multiplying the resultant ratio by the base power of the Psynergy being used. In addition, it is also a status-changing Psynergy. The chance of a status change depends on the Luck rating of the target; targets with low Luck have a higher chance of being affected.

Elemental Power attacks such as Toxic Grit use a set base power as the base damage to be modified. For example, the base power of Toxic Grit is 125. Thus, an unmodified Toxic Grit would deal around 125 points of damage, excluding potential damage due to Venom.

Toxic Grit's attack takes this base damage value and uses it in the following equation:

To word this in prose, Toxic Grit takes the base damage of the particular attack, and then modifies this by how much higher or lower the user's Venus Power is than the target's Venus Resistance. The difference between the user's Venus Power and the target's Venus Resistance is then divided by 200, then 1 is added to this, resulting in what can be called the "elemental damage multiplier". This number is what the Psynergy's damage is multiplied by.

For example, if an Adept with a Venus Power of 150 casts Toxic Grit on a monster with a Venus Resistance of 50:

Therefore, a Toxic Grit cast under these circumstances would deal approximately 187 points of damage to the main target. Since Toxic Grit is a ranged Psynergy, adjacent targets would take a percentage of the total damage, with the percentage decreasing as the distance from the main target increases.

General: The Toxic Grit Psynergy is one of only two Psynergies that can inflict the useful Venom status on a target. In addition, it is a fairly decent damage dealer when learned, meaning that it can be useful for attacking large numbers of opponents; those that aren't poisoned will still take damage, unlike many other status-inflicting moves. Most bosses are immune to Toxic Grit's side-effect due to their large Luck ratings; however, Toxic Grit can still be useful against strong randomly-encountered monsters.

Golden Sun: Dark Dawn: The Toxic Grit Psynergy plays well with the Curse Mage's Psynergy setup, which is geared towards general support and magic-based offense. It is Himi's best status-changing move due to its additional offensive properties, and makes a great first move in a battle. Himi will usually be faster than enemy monsters, and thus a successful poisoning ensures that the monster will be damaged right after they move. Himi's high PP pool ensures that the high cost of Toxic Grit won't strain the PP pool, while her naturally higher Venus Power strengthens Toxic Grit's offensive power.