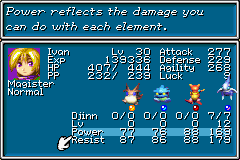 Some characters are naturally higher in elemental power than others, and power levels are further raised by the amount and elements of set Djinn.

Elemental Power, often just called power, is a battle statistic that modifies the amount of damage or healing an Adept will do with element-based attacks such as Summon sequences and weapon unleashes or element-based healing spells like Ply Well.

Setting Djinn is the easiest way for a playable Adept to increase Elemental Power. Each set Djinn will increase the Power in the corresponding element by 5 points per Djinn. However, certain pieces of equipment, such as the Virtuous Armlet, will increase Power when equipped. However, this equipment is usually limited in number, and only affects a certain element. In battles, the player can increase an Adept's Power in a certain element by having that character perform a Summon. Summoning increases Power according to the number and type of Djinn used to fuel the Summon. For example, summoning Atalanta would increase Jupiter Power by 30, while summoning Judgment would increase Venus Power by 100. Unlike Elemental Resistance, there are no Psynergies capable of raising Elemental Power.

Like playable Adepts, most enemy monsters or Adepts will possess the highest power in the element they are aligned with. However, the Elemental Power in the other three elements varies greatly. Some enemies may possess a decent Power in a secondary element, or may have low Power in all three elements. Non-Adept humans will also have Elemental Power ratings. However, these ratings will usually be equal across all four elements, and fairly low in comparison to elementally-aligned enemies.

In battle, Elemental Power works as a percentage multiplier on Element-based attacks, which include Psynergy, many Enemy Abilities, and weapon Unleashes. Offensive Elemental Psynergy that has base power values like Quake Psynergy series, Elemental Physical Attacks that deal otherwise normal physical attacks like Ragnarok, and curative Psynergy like Cure Well all have their own formulae for how strongly the user's Elemental Power affects their damage outputs - and the Resistance of the target is a part of the formulae for the effects that are not curative. These are described in detail below:

There are no known ways to decrease Elemental Power, however it should be noted that the Break Psynergy will eliminate all bonuses any affected Adepts have received from Summoning or any stat-boosting Psynergy/Djinn in battle.