This article or section has been identified as needing to be either cleaned up, reformatted, or rewritten. Please help us improve it by editing. 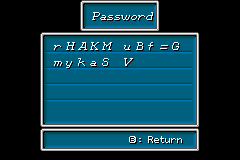 The Send function in the Golden Sun games is a way to transfer game data from the first game to the second game, using either a Password or Game Link Cable. The Password is obtained from the first game's Send menu, which is made accessible on the game's main menu by holding left on the D-pad and the R shoulder button simultaneously, and then pressing either Start or B. A Golden Sun save file must be registered as Clear Data on the game's Continue menu in order for the Send option to appear. In The Lost Age, players will be prompted to transfer save data when starting a new file if they so choose; however, data can still be transferred to a The Lost Age save file at any time before the Reunion.

There are three grades of passwords available: Bronze, Silver, and Gold.

The Silver password transfers all of the above, plus the exact stats of the original characters, so that stat boosts from items like the Power Bread are not lost. This is useful if the player would like to get a head start on maxing out all stats/levels for Isaac's party, particularly if the transferred stats have been amassed through level-grinding in the first game. The Silver password is 61 characters long.

The Gold password transfers all of the above plus the total amount of coins Isaac's party has amassed at the end of Golden Sun and every item in the four characters' inventories. The Gold password is notoriously long, weighing in at 260 characters, over four times the length of the Silver password.. Because most equipment from Golden Sun will be quickly outclassed by equipment found later in The Lost Age, some players may opt for the shorter passwords. However, valuable Golden Sun-exclusive artifacts such as the Cleric's Ring, Lure Cap, Elven Shirt, and Storm Gear for example may attract players to the Gold password.

The Game Link Cable transfers all of the above, plus Pause menu settings. In addition, while the Gold password transfers equipment unequipped and Djinn shuffled, the Game Link Cable transfers equipment and Djinn organized among the characters exactly as they were at the end of Golden Sun. However, an advantage to the Gold password is that it unequips cursed items for free.

It's just barely possible to transfer all Golden Sun-exclusive items that the player is allowed to retain to the end of that game to The Lost Age, though there's no additional reward for doing so.