From Golden Sun Universe
(Redirected from The Reunion)
Jump to: navigation, search 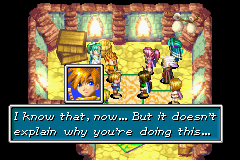 The meeting between the respective parties of Golden Sun and Golden Sun: The Lost Age in a building in Contigo is identified as the "Reunion".

The reunion refers to the point in Golden Sun: The Lost Age when both Felix and Isaac's parties join forces. This event happens in Contigo after the Jupiter Lighthouse episode. After the reunion, many of the game's areas can be revisited to reach places you normally couldn't go to without Psynergy from Golden Sun.

The reunion is the event that the game's Data Transfer system revolves around and ends at. Since the reunion is the event where Isaac's party from the original Golden Sun joins your current party in The Lost Age, their inventory and power levels will match what they were in the previous game based on whether Data Transfer has been used in this game file or not. This means any changes to Data Transfer to the file via the Update feature on the main menu has to take place before this event. The Update feature brings you to a screen that identifies which of the save files currently on the cart has been saved after the reunion (as "Post-Reunion Data") and the selectable, updatable files that have been saved before the event. 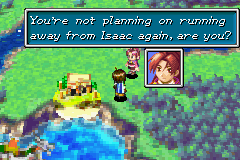 If the player attempts to enter Atteka Inlet, Jenna will scold Felix to follow through with his promise to meet up with Isaac's party.

After having met atop Jupiter Lighthouse, but knowing full well that the aerie of the tower was not a safe place for the two parties to converse at length, as well as the fact that both of the groups had fought with the powerful Mars Adepts, Agatio and Karst, Isaac's party withdrew to Contigo to wait for Felix's group. Although Felix had been avoiding Isaac, so as to not be forced to fight his childhood friend, he fulfils his promise and promptly head to Contigo. Here, the two parties meet in earnest. Felix's motives are quickly explained, he had hoped to be the only one to betray Vale's laws and customs, the only one to help Saturos and Menardi in their quest. The reason is a simple one, his parents and actually alive and well, rescued by Saturos' part shortly after the Mt. Aleph boulder fell in the prologue of the first game. Isaac quickly realises the implications of this, as he had long believed his own father had died in the same storm, also washed downstream when the boulder fell. Understandably, even if he had revealed the truth to the citizens of Vale and gotten the combined help of Jenna, Garet and Isaac, they still would have been no match for Saturos or Menardi. Hence Felix was forced to go along with their plan.

But this was only the initial reason, as after travelling to Lemuria, Kraden, with the aid of King Hydros, had discovered that the world of Weyard was gradually dying. Without the Elemental Lighthouses to sustain Weyard, Gaia Falls, the waterfalls at the edge of the world, were slowly eroding the entire land away, thus leading to the eventual death of Weyard. Isaac is faced with an enormous decision, as he knows full well that the power of Alchemy could give mankind the catalyst it needs to destroy the planet. Deciding that this was a risk worth taking, Isaac agrees to help Felix to light the final beacon.

It is then that Hama enters, revealing herself to be a descendant of the Anemos, and Ivan's sister (much to Sheba's dismay, as she had hoped to find her own family in Contigo). But more importantly, she urges the eight Adepts (and Kraden) to hurry and head to the Mars Lighthouse. She warns that with the lighting of three beacons had sent the world on a path to destruction, as without the warmth of the beacon of fire, a never-ending winter threatened to engulf the planet, fuelled by the frigid winds of the Jupiter beacon. She also reveals that a "powerful force" seeks to stop Agatio and Karst from completing their goal, and as such had installed the Wings of Anemos onto Piers' Lemurian Ship, to aid them on the final leg of their journey. Felix, Isaac and their respective parties enjoy a brief moment of happiness, knowing that they would no longer be each other's enemies, before heading out to light the final beacon.