Weyard is a flat world, Angara is the northern central continent, Gondowan is directly south, the Eastern Sea is east of these two continents.

Weyard (ウェイアード, Weyard) is the world on which the Golden Sun games take place. It is a flat world, and the water of the oceans continually flows over its edges. In land locked places where there is no water to flow off the edge of the world, there is a sheer drop that goes down for an unknown height into nothingness. The places where the water begins its fall into oblivion are collectively called Gaia Falls. Weyard appears to be based on a flat map of the real Earth ,as it was a couple of million years ago, with the edges represented by Gaia Falls (the continents are in their generally correct locations with the exception of Indra, which was artificially moved by the tidal wave in the beginning of Golden Sun: The Lost Age.)

Details of Weyard's ancient past were revealed sporadically throughout the Golden Sun games. See Weyard (ancient past) for full details.

Similar to Earth, Weyard has seven continents. It is unlikely that Weyard's continents follow the plate tectonics of Earth, as a tidal wave was able to move the entire continent of Indra southwards and wedge it between Southern Gondowan and Western Osenia. 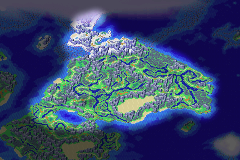 There are a number of locations scattered around the Great Eastern Sea and Great Western Sea, but are too small to be called continents in their own right.

Weyard has many bodies of water, and most are named, with the exception of rivers, which are hardly mentioned at all in the games.

The primary sapient race are Humans, who are located across Weyard in what are initially sparsely populated settlements. At one point in the distant past, Humans lives in great civilizations, most of which disappeared after the sealing of Alchemy. After the Golden Sun event, Humans once again began growing their settlements in powerful countries. At least three ancient races of humans are known: the Jenei, the predecessors of modern-day Adepts, the Exathi, a race of skilled craftsmen, and the Fori, an ordinary race of people who possessed neither Psynergy or craftsmanship.

In the wilderness between human civilizations is all manner of wildlife. At the start of Golden Sun, when Psynergy Stones rain all over the world, the wildlife become savage monsters, and other more fantastic creatures such as the undead (corporeal ghosts, zombies, and animate skeleton) and dragons arise as well. It seems to be implied, however, that monsters did exist in smaller numbers beforehand. It is also known that there was an increase in monsters around the time of the great flood.

Other human-like races are found on Weyard, but certainly not anywhere near as diverse and varied as a high-fantasy world such as Lord of the Rings. One of the visitable settlements is home to a race of mining dwarves, while another is home to a race of humans that transmogrify into lycanthropes when they look upon the full moon at night. The northernmost settlement of Prox is home to a race of cold-resistant humans with lizard-like scales and pointed ears, and a powerful sorcerous command of fire-based Psynergy. In the ancient past, there existed a race of hybrid man-beasts known as Beastmen. The Beastmen disappeared after the sealing of Alchemy, but spontaneously reemerged after the Golden Sun event, mutating from random men and beasts located throughout Weyard.

Other sentient life in Weyard includes the elder tree spirits, the Waelda, that live in Kolima Forest, the chiefs amongst them named Tret and Laurel. Initially they were guardians of the forest to the extent that Tret's death would mean the death of the forest. Falling Psynergy stones gave them both powers but also affected their emotions, and therefore their actions severely. While they were later healed, they still possess their powers. There are other Waelda effected by the Psynergy stones, as made clear by Tret and Laurel.

In addition to the above corporeal creatures and races are a diverse assortment of spiritual entities. Formerly residing in Mt. Aleph and collectible throughout both games are magical creatures called Djinn, which come in four varieties, one for each element. These creatures each have a unique ability based on its element, and their general power can be harnessed by Adepts to bolster their own Psynergy-based powers, or to call upon and summon powerful entities to cause massive damage to the opposition. These spiritual entities are embodiments of their respective elements and take the form of mythical entities prevalent in real world cultures, examples including the Nordic god Thor using an electricity-laden hammer, or a demon duke named Haures, or a deadly Grim Reaper-like entity named Charon. The greatest of these summonable spirits is a goddess named Iris.

The retail version of Golden Sun shipped with a stylised map of Angara and northern Gondowan, while Golden Sun: The Lost Age shipped with a map of the whole of Weyard, albeit missing the names of many places.