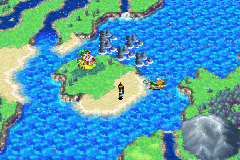 West Indra Islet, reachable as soon as you get the Lemurian Ship and located between Gondowan and Indra.

West Indra Islet (インドラ大陸西の小島, W Indra Continent's Islet) is a tiny settlement on a small island located in the watery divide between the continent of Gondowan to the west and Indra to the east. It may be visited in Golden Sun: The Lost Age starting from when you get the Lemurian Ship to explore the Great Eastern Sea with. It is not a mandatory location to visit for completing the game, but it is one of a series of locations in an item-trading "chain of deals" that leads to gaining access to the optional dungeon Islet Cave.

The island is inhabited by a nuclear family that live on a wooden pier of sorts they built on the shallow water. The two parents, two sons (one of whom is identified by the name Kirt), and one dog used to regularly sail in their wooden boat through the area of sea between Gondowan and Indra, but then the tidal wave that transpired at the beginning of The Lost Age washed over much of the lower Great Eastern Sea and shifted Indra southwest to rub against lower Gondowan, blocking up the sea route. The placement of the island prevented it from being affected at all by the calamity, which the family is grateful for. When Felix and his party of Adepts are on their quest in The Lost Age to eventually reach the Great Western Sea, they essentially reaffirm from the family during a brief stop at West Indra Islet that the now-closed-up waterway between the two continents was the one easy way to cross from the Eastern Sea to the Western Sea, so they would have to somehow get past the natural obstacles now at the point where Indra and Gondowan make contact in the future.

The location is present on an island in the overworld, so if one considers the small island mass the location is based on part of "West Indra Islet", then at West Indra Islet you fight the same array of random monsters as many other land-based locations in the Great Eastern Sea that you would also be able to reach with the Lemurian Ship: 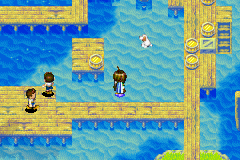 Aside from the important trade of Milk for the Li'l Turtle you can conduct with the dog, there is indeed not much here.

The location itself, free of random encounters of course, is a wooden pier with a tiny house, several NPCs, and a lot of barrels. The information provided by the NPCs is intended to clue the player that sailing south between the continents and through the Gondowan Cliffs at the bottom of the watery trail is the way that access into the Great Western Sea is made possible with, despite the fact that there is one particular natural obstacle down there that you cannot get without a certain Psynergy acquired much later in the game.

At the upper left area of the location, a barrel to the right of the adult male NPC contains a Lucky Medal. You can reach the dog in the shallow water by hopping right and going down a small set of stairs. If you have the Milk rare item previously acquired at N Osenia Islet, you may present it to the dog here, who will trade you the Li'l Turtle rare item. This is the item you need to present to the turtle at Sea of Time Islet in order to open up access to the Islet Cave optional dungeon. Beyond these, there is no further purpose to West Indra Islet.

Li'l Turtle: Received from the dog by trading the Milk.

Lucky Medal: Found in the barrel to the right of the NPC in the upper-left area.