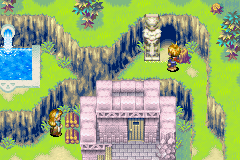 The southern entrance to the tunnel is hidden behind this statue.

Kalay Tunnel (カレイの地下道 Kalay Underground Tunnel) is a series of underground pathways and a sewage network of sorts located underneath Kalay.

It has three entrances/exits: In the town itself in a cave entrance at the town's northeastern area, at the initially sealed-off end of a hallway in Hammet Palace, and "officially" at an always sealed-off point near the town named Kalay Tunnel Entrance (カレイの地下道前 Kalay Underground Tunnel Entrance). At first, the only thing that can be acquired from this place is the most important one, a Mars Djinni named Scorch. Later, in response to completing the sidequest at Lunpa Fortress, the rest of the tunnel opens up to be properly explored, and what can be then looted includes the Spirit Gloves and an Apple.

The tunnels are arranged to funnel water from a small lake near the town (this lake is not visible on the overworld map) and empty them into the two fountains at the northern area of the town. The tunnels can also be used by Master Hammet to sneak out/into his palace if necessary. 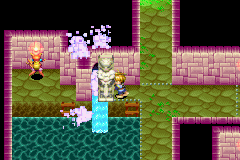 The Mars Djinn Scorch can be found in the immediately accessible portion of Kalay Tunnel.

As soon as you enter, you will see a statue, and a hole in the wall where water is pouring out. Push the statue in front of the water, and the pit it was going into will drain. Climb down the formerly submerged ladder and then up another to reach the Mars Djinni, Scorch. For now, exit the area, as you cannot currently reach the end. There is another entrance to the tunnel, but for now it is inaccessible.

Once you have returned Master Hammet, you will have full access to the tunnels. From Hammet's Palace, go through the right door and down the stairs; the gates that formerly blocked your path are now removed. Go through and down the stairs once more. You will see Bunza standing near you when you come out. South of him is a room with 4 treasure chests (containing Sleep Bomb, Lucky medal, Coins, and a Potion.) and a statue. Push the statue out of that area and in front of where the water is falling from to stop it, draining the area. Climb down the ladder, Frost the puddle, and then climb up the closest ladder and jump across to open the chest and get Spirit Gloves. Climb down, go back up near the statue and head north, up a set of stairs. Head south, then travel along the water to the left and up the north path to another set of stairs. Go up, and in that room up again. You are now in a cave-like area; run south. To the right is a treasure chest containing an apple. There is a door you can exit from here as well. Once outside, you can walk over to the tree and use Catch to grab the Nut off. You are now in the Kalay Tunnel "Entrance". You can exit from here, there is a drop to the left, or walk back to Hammet's Palace.

After rescuing Hammet from Lunpa Fortress, Bunza will have opened up the rest of the tunnel, including the entrance to the tunnel from inside Hammet Palace. He will also have opened up Hammet's vault which contains four chests, and they contain:

In addition, inside is a moveable Statue which can then be moved all the way up and left to block the waterfall, allowing you to get to a fifth chest:

Finally, following Kalay Tunnel up to its exit into the outdoor Kalay Tunnel Entrance area, there are two more treasures: