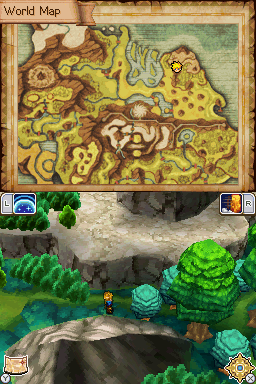 The west exit from Kolima Junction can be opened up as a shortcut to the area with Talon Peak after having proceeded through Kolima Forest.

Kolima Junction, as the name suggests, is a central point where multiple paths come together. Going south leads back to Kolima Forest, while going east leads to Talon Peak. The western path serves as a shortcut back to Belinsk. Matthew's party first travels here after their meeting with Tret and Laurel. Having learned that the Slap Glove would be needed for their party to awaken the Mountain Roc, Matthew's party attempts to go and find it. They are stopped by Ryu Kou and Hou Zan, who overheard the Adepts' conversation with the Waelda. Ryu Kou reveals that Sveta gave him the Slap Glove, and offers to let them use it, in exchange for assistance in breaking into Belinsk's fortress.

Through their conversation, the Adepts learn that Sveta is actually a member of Belinsk's royal family. Though upset at the revelation, the Adepts decide to partner with Ryu Kou and Hou Zan, feeling that is what Sveta wanted the entire time.

Kolima Junction is a short two-area extension of the Kolima Forest dungeon-style area connected to the north end of the forest. There is an entrance into its left screen straight from the overworld region of Morgal, but this is a dead-end until it is opened up from the inside, which can only happen after Kolima Forest is completed and the party enters north into the right screen of the Junction. 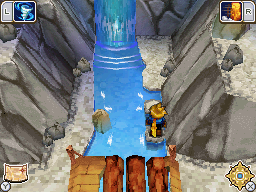 The western portion of Kolima Junction. The Mercury Djinni Teardrop hides in this area.

When the right screen of Kolima Junction is entered, the path branches left and right, and whichever branch you initially try to go, another story-important cutscene triggers, through which you obtain the Slap Glove. This bestows the Slap Psynergy when equipped, but unlike normal Utility Psynergy items, this is a glove-class item that you will have to unequip a hand-armor off one of your Adepts to use. Afterwards, you can take the exit out to the right to progress towards the next dungeon area of the game, Talon Peak, but before that you should take the left path into the left screen of Kolima Junction, which has a waterfall. Roll a log left so that it piles up on a group of logs resting up against a boulder, and then place yourself right at the logs and cast Crush to convert this roadblock into a bridge against the river. This opens up the shortcut from the overworld into Kolima Junction. Hop north of the logs toward the waterfall in order to quickly gain the Mercury Djinni Teardrop without a fight.

Slap Glove: Given to the party temporarily by Ryu Kou.

Teardrop: Found in a waterfall in the western portion of Kolima Junction.