This article is about a village. For the country located in the northeast of Ei-Jei, see Sana. 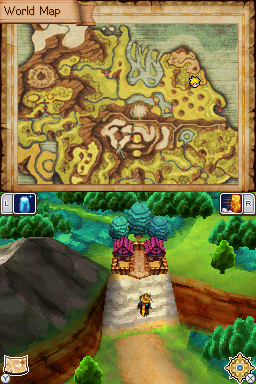 Saha Town is located in front of where Kolima Village relocated on account of the Golden Sun event.

Saha Town (サハ Sakha) is a small town first visited in Golden Sun: Dark Dawn. It is located in the country of Morgal, near Kolima Village. Its Encyclopedia entry reads as follows:

This town rests on the former marshland made habitable by Kolima Village's migration. It is a popular stop for people wanting to buy dream leaves. 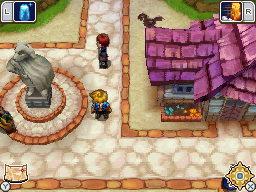 Saha Town is populated by both humans and beastmen; the central statue memorializes a beastman crusader for interracial relations.

Prior to the Golden Sun event, Saha Town resided on uninhabitable marshland. However, when the effects of the event caused both Kolima Village and Kolima Forest to move eastward, the land around Saha become fertile, inhabitable ground. As the towns now bordered each other, a fence and gate marked the border, and controlled access between the two towns. Saha's proximity to Kolima made it a popular resting point for travelers seeking to buy Dream Leaves from Kolima's vendors. The center of town is home to a statue of an unnamed beastman, who is described as working toward peace between humans and beastmen.

When Kolima's Dream Tree abruptly began producing Dream Leaves that caused nightmares, the citizens of Saha closed the gate, making Kolima inaccessible, due to fears of a curse. Matthew's party arrives in Saha during this time. Despite the gate being closed, Matthew's party is able to travel to Saha via an underground tunnel system that connects Saha's and Kolima's wells. When the Dream Tree was eventually healed by Matthew and company with the use of the Hermes' Water given by Briggs, the gate once again opened.

Saha's inn is located in the southwestern-most building, right next to the weapon and armor shop, and costs 15 coins per party member.

Wisp: found in the western chamber of Saha Cistern. Only accessible after obtaining the Crush Tusk from the dungeon in Kolima Village.

Nut: Found in a wooden box under the stairs at the Inn.

Coins: 30 coins in a barrel at the house right of the Herb Stand. (First barrel on the left as you enter)

Sacred Feather: Found in a wooden box directly behind the Herb Stand.

Elixir: Found in a pot in the northwest most house. (Closest pot towards the door)

Antidote: Found in a pot outside the northeast most house.