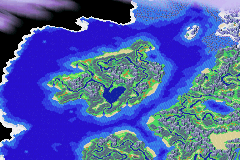 The main landmasses in the Great Western Sea are those of Hesperia (centre) and Atteka (bottom). It is thus very important from a story perspective, as it holds Jupiter Lighthouse.

The Great Western Sea (大ウエスト海, Great West Sea) is a large ocean in the west of Weyard, the counterpart to the Eastern Sea on the other side of the world. The Western Sea is the second largest body of water on Weyard. The Western Sea has shores on the small sections of the south of Indra and Osenia, south and western Gondowan, the west coast of Angara, the Northern Reaches (it is the only way that area can be accessed), the north coast of Tundaria and it also surrounds the continents of Hesperia and Atteka where Jupiter Lighthouse is located. The Western Sea also contains smaller land masses, the SW Atteka Islet, and Kalt Island. Like the Eastern Sea, the Western Sea continually spills off the edge of the world forming part of Gaia Falls.

The wide river that (for the most part) forms the border between the Western and Eastern coasts of Gondowan south of the Suhalla Range spills it's water into the Western Sea.

Although Angara has a shore on the Western sea, it is generally very mountainous, and gaining access to much of the landmass from the sea is impossible, with only Loho being easily entered. There is a glitch however, that allows the player to hop off their boat onto a section of beach that allows them to walk across Angara and even to Vale, though most places have been removed and hence not all of the landmass is reachable (Vale is only visible as an overworld image, for the purposes of being seen during the final credits, and is not actually an enterable town).

The Great Western Sea holds vast importance for the plot of The Lost Age, as it contains the third Lighthouse, the Jupiter Beacon. Initially unable to explore Jupiter Lighthouse properly, Felix's party head to Shaman Village, whereupon they acquire the Hover Jade, although the process is not a straightforward one, as the people of the Village are xenophobic, and extremely untrusting of the rag-tag group of Adepts. After overcoming the challenge of the appropriately-named Trial Road, Felix's party head to Atteka, where they see that the townspeople of Contigo are hard at work building the Wings of Anemos, to fulfil an ancient prophecy. As the wings are incomplete, the group head on to Jupiter Lighthouse, to set alight the beacon of the wind. It is here that the three parties finally cross paths, as Agatio, Karst and Alex set a trap for Isaac's party, ensnaring Mia and Garet. This allows the two Mars Adepts to defeat Isaac and Ivan in two-on-two combat. But before the final blow is struck, Felix's party intervenes, saving Isaac before returning to the aerie to light the beacon. Felix too is set upon by the Mars duo, although the battle is inconclusive, as Agatio and Karst flee to light Mars Lighthouse before they are attacked by the combined group of eight Adepts, a battle they would almost surely loose, especially since Alex did not help them in the battle, much the opposite, Alex actually heals Felix's party before the fight.

After this, in Contigo, Felix explains his motives to Isaac, who agrees to join forces, as he accepts the fact that not restoring Alchemy would cause Weyard's gradual demise, something he had no intention of letting happen. The Wings of Anemos are completed and attached to Felix's ship, allowing the united group of Adepts to travel though the Western Sea much faster and further than was previously possible. Initially, they head to the Northern Reaches, only to discover it is blocked with ice, and progress is impossible. But eventually, with the aide of the cannon from Loho, fuelled by a Magma Ball from Magma Rock, the party is able to clear this final hurdle and enter the icy north, whereupon the final act of The Lost Age begins. In the meantime, Alex, having abandoned Agatio and Karst after leaving Jupiter Lighthouse, leaves the Western Sea and heads all the way back to Angara, where he secretly begins scaling Mt. Aleph, knowing that the last key to unlocking the ultimate power of the Golden Sun would shortly be used, as only one light remained unlit: the fiery beacon of Mars.

Kraden has reviewed the contents of this article and believes it could do with a bit of expansion. Please oblige him to meet the quality standards of the rest of this tome of knowledge.
Retrieved from "https://goldensunwiki.net/w/index.php?title=Great_Western_Sea&oldid=61087"
Categories: