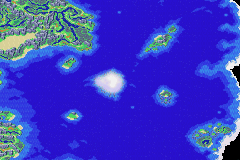 The vast body of water to the East of Weyard's main landmasses (Angara and Gondowan) makes up the Great Eastern Sea.

The Great Eastern Sea (大イースト海, Great East Sea) is a huge ocean that constitutes the largest body of water in Weyard. It has a counterpart in the Great Western Sea. The Eastern Sea meets the majority of coastline on Angara, Indra and Osenia and large portions of the coastline of Gondowan and Tundaria.

The Eastern Sea has many large land masses situated entirely within it such as Izumo, Treasure Isle, Sea of Time Islet and the Apojii Islands, as well as three Islets of medium importance. The Eastern Sea also completely surrounds the turbulent Sea of Time (which in itself surrounds the island city of Lemuria). Due to swift currents, dangerous reefs and perpetual mists that surround the smaller Sea of Time, the two seas are considered distinctly separate areas despite sharing the same waters.

As of the beginning of The Lost Age, the Great Eastern Sea and the Great Western Sea are divided by a continuous mass of land, reefs and ice, as upon the activation of Venus Lighthouse, rocks made the seas north of Tundaria impassable and the continent of Indra was shifted to block the sea route that had previously existed between Osenia and Gondowan. The Eastern Sea is a lifeline of trade and travel for coastal locations such as Champa, Apojii Islands, Alhafra and Lalivero (while Lalivero isn't strictly on the coast, it has ready access to the sea).

After the Golden Sun event, the Great Eastern Sea is drastically altered, and splits into two halves, with the northern portion being at a higher elevation than the southern half. The northern half borders Angara, and includes the island of Nihan, as well as several newer islands, such as Otka Island, Harun Island, and others. The northern half now includes several smaller, ill-defined seas, the Otka Sea and the Sanan Sea. These areas are home to trade routes between cities in Angara, such as Tonfon and Port Rago, and island cities such as Yamata and Harun Village.

The status of the southern half is not well-known. However, it can be presumed to border the continents of Gondowan, Indra, Osenia, and Tundaria.

At the edge of the world, the Eastern Sea continually spills off the edge creating a giant waterfall called Gaia Falls. Currents near Gaia Falls are stated to be fast and treacherous. Despite the massive amounts of water that fall over the edges, the oceans never run out of water.

Upon the activation of the Venus Lighthouse, the great demigod Poseidon awakens, triggering a massive Tidal wave that washes out of the Seas of Time and travels across the Eastern Sea, hitting Idejima and shifting the continent of Indra as it makes landfall. Around this time, the Eastern Sea's temperature begins to rise, rapidly depleting fish stocks. This, coupled with the destruction of all major boats by the tidal wave, makes fishing a difficult industry to be in, which is devastating for the citizens of Champa, who rely solely on fish for their livelihood. Seeking a new source of income, Briggs and his crew set out, eventually becoming notorious pirates who steal with a great deal of success before they are apprehended by Felix in Alhafra.

As for Felix's party, after having recruited Piers and, by extension, his Lemurian Ship, they set out to explore the Great Eastern Sea. They do this for several reasons, firstly, to acquire the skills necessary to navigate the Seas of Time without falling victim to the swift and dangerous currents located within. Secondly, to find any Psynergy, that might aid them in their quest to light the remaining Elemental Lighthouses, most notably from the Elemental Rocks (specifically Gaia and Aqua Rocks). They soon find their respective tasks are impossible, as the former is blocked by the massive sea beast, Poseidon, who is invulnerable to all their attacks, and the latter by a jagged rock reef sitting in the middle of the only possible route to the Great Western Sea at Gondowan Cliffs. To fell Poseidon, the group is forced to collect the three prongs of the Trident of Ankohl from various towers scattered across Weyard, which they re-forge into the legendary weapon using Champa's ancient forge. This allows them to enter Lemuria, where the King, Hydros, gives them the Grind Psynergy, enabling Felix to clear away the reefs that were blocking his party's passage through Gondowan Cliffs, finally allowing them to access the Great Western Sea.

Other notable events that the party perform in the Eastern Sea include saving the village of Izumo from the terror of Gaia Rock's Serpent, inadvertently giving the pirate Briggs a means to escape Alhafra and meeting Agatio for the first time (his partner, Karst will be met before the party heads out to sea).

After the Grave Eclipse begins, Matthew's party of Adepts takes to the sea in the recently repaired sailing ship to escape Belinsk, which has been overwhelmed by evil monsters. The initial departure is treacherous, due to a fierce storm, but the ship survives. The next morning, the Adepts hold a meeting to determine their next plans. They come upon two goals: to find an area where they can view the Eclipse from the outside, and to speak with leaders of various cities located in or near the sea to find out any information about stopping the eclipse.

The Adepts first travel to Harun Village, where they learn of a legend regarding the Watchtower, a mysterious tower that appeared at the Eclipse's rise. Matthew's party explores the tower and gains its treasure, the Third Eye. The party then sails to the nearby island of Nihan, where Yamata is located. Here, they learn that the Apollo Lens, located in the heart of Angara can end the Eclipse. However, the Lens can only be explored by those warriors that possess the Umbra Gear, a set of equipment that shields the wearer from the intense light in the area. Each piece of the Umbra Gear is located in a different area, mostly remote islands in the Great Eastern Sea. With this in mind, the party explores the Eastern Sea to collect each piece. At times, they sail back into the Eclipse's shadow, encountering the same evil monsters as were at Belinsk.

At some point, Matthew's party encounters a whirlpool located near the middle of the sea. This whirlpool grants access to a lower portion of the sea, granting the party access to Crossbone Isle.

There are many monsters lurking in the deeps of the ocean that can be encountered in Golden Sun: The Lost Age.