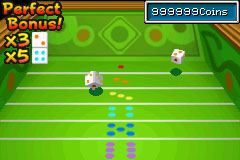 Lucky Dice is located in Tolbi and Contigo.

Lucky Dice is a gambling minigame in Golden Sun and Golden Sun: The Lost Age. It is a very simple game that can be found later on in both game carts, and prizes are strictly centered on coins. In The Lost Age, a second Dice-based game called Super Lucky Dice is added.

Gameplay takes place on a green square table reminiscent of Craps and Roulette tables seen in modern-day casino games. The table is divided into six equally spaced regions, each representing a value between one and six like the values on a die. The object of the game is to throw a pair of dice into the table and hope for matching numbers based on what the dice show and where the dice land.

Betting is a very simple process; the moment you throw dice, the game automatically bets your money for you. The value of the bet is determined by the experience level of your party; the bet is equal to the lowest level of any of your party members, multiplied by ten. Therefore, if Ivan were at level 28 while Isaac were at level 26, the bet would calculate to 260 coins. Likewise, a level 54 Felix out of a party of level 52 Adepts would cause the bet to be 520 coins.

At any rate, once you throw a pair of dice and the bet value is deducted from your total coin account, the game takes over. When the two thrown dice land, not two but four values are returned: the two values of the rolled dice themselves and the values of the regions on the board where the dice physically land. For example, if the two dice themselves return values of 4 and 6, and one of these dice lands on the 2 region of the board while the other lands on the 4 region, the values returned are one 2, two 4s, and one 6. The outcome of this would be a Pair. 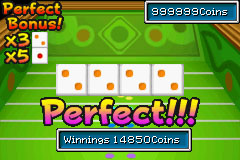 A four-of-a-kind with a Perfect Bonus multiplier.

An additional element to increase the potential for winnings is called the Perfect Bonus. At each game played, two of the six dice values chosen at random will have multipliers next to them shown on the upper left of the screen. This means that if you roll four of a kind of the value next to the multiplier, your total winnings will be multiplied accordingly. This is the equivalent to the Jackpot value. In the example pictured, the four-of-a-kind rolled is based on a value of two, which currently has a Perfect Bonus multiplier of 3, so the payout is 15 times the value of the original bet instead of five times. The highest payout for Lucky Dice possible, based on having a level 99 party and rolling a four-of-a-kind based on a value with a multiplier of five, comes to 24,750 coins.

A light strategic element manifests itself in the form of being able to control how high you physically throw the dice. You are able to position your hands to determine the height and distance the dice are thrown across the table, which can influence where the dice end up. If you throw them at the lowest level possible, they will bounce less and more often than not end up on the farther end of the board. If you throw them at the highest level possible, the dice will ricochet and bounce several times but still will end up at the top end of the board more often than not. Throwing them at the medium level at default will make any area of the board fair game. Generally, one adjusts throwing distance to attempt to increase the chance that the dice will land in a board area with a Perfect Bonus currently attached to it.