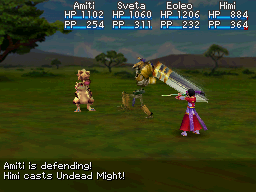 Undead Curse, Undead Gloom, and Undead Might are offensive, single-target Psynergies. The overall power of each stage is determined by comparing the user's Venus Power and the target's Venus Resistance, and multiplying the resultant ratio by the base power of the Psynergy being used.

Visually, each stage of the Undead Curse series features the caster summoning a monster to attack the targets. Undead Curse summons a Zombie, and Undead Gloom summons a Skeleton. Undead Might summons an armored skeleton not seen elsewhere that resembles a smaller, colorful version of Deadbeard.

Undead Might's attack takes this base damage value and uses it in the following equation:

To word this in prose, Undead Curse, Undead Gloom, and Undead Might take the base damage of the particular attack, and then modifies this by how much higher or lower the user's Venus Power is than the target's Venus Resistance. The difference between the user's Venus Power and the target's Venus Resistance is then divided by 200, then 1 is added to this, resulting in what can be called the "elemental damage multiplier". This number is what the Psynergies' damage is multiplied by.

For example, if an Adept with a Venus Power of 150 casts Undead Might on a monster with a Venus Resistance of 50:

Therefore, an Undead Might cast under these circumstances would deal approximately 375 points of damage to the target.

Golden Sun: Dark Dawn: The Undead Curse series is an excellent offense for Himi, should she be in the Curse Mage class. It can be excellent in tandem with the Raging Heat series, with the Undead Curse series finishing off the targets left behind by the Raging Heat series. The series fits in well with Himi's role as a supporter and spellcaster, and would likely do more damage than she can physically.