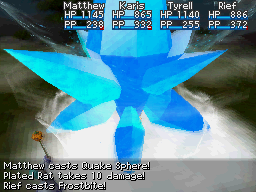 Frostbite being cast in Dark Dawn

"This water-based Psynergy produces an arctic chill. By focusing its power on a specific point, the user can turn a water source into a pillar of ice."

Cold Snap, Coldforge, and Frostbite are ranged, offensive Psynergies. The total amount of damage is determined by the the caster's Mercury Power and the target's Mercury Resistance in comparison with the base power of the spell being used.

Visually, each stage of the Cold Snap series resembles gusts of polar wind converging to create a block of ice. The gusts of wind grow stronger, and the shape of the ice block changes with each stage. Cold Snap creates a small chunk of ice, Coldforge creates a moderately sized chunk, and Frostbite creates a large ice crystal. Once the ice block is formed, it shatters with an increasing amount of force between successive stages.

Elemental Power attacks such as the Cold Snap series use a set base power as the base damage to be modified. For example, the base power of Frostbite is 140. Thus, an unmodified Frostbite would do around 140 points of damage.

Frostbite's attack takes this base damage value and uses it in the following equation:

To word this in prose, The Cold Snap series takes the base damage of the particular attack, and then modifies this by how much higher or lower the user's Mercury Power is than the target's Mercury Resistance. The difference between the user's Mercury Power and the target's Mercury Resistance is then divided by 200, then 1 is added to this, resulting in what can be called the "elemental damage multiplier". This number is what the Psynergies' damage is multiplied by.

Therefore, a Frostbite cast under these circumstances would deal approximately 210 points of damage. 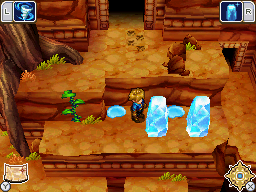 Cold Snap is the identical successor to Frost from the GBA games, turning puddles of water into ice pillars that can be hopped across.

Cold Snap, the first entry of the series, is a Utility Psynergy used in many puzzles throughout Dark Dawn. In general, Cold Snap is functionally identical to the Frost Psynergy of Golden Sun and The Lost Age. Cold Snap is used to freeze puddles of water into frozen ice pillars. This is integral to solving many puzzles, as the ice pillars can be used as platforms. Unlike Frost, however, the effect of Cold Snap can be easily reversed, via using Fireball on the ice Pillar to melt it. Cold Snap can also be used on large, snowflake-like floor designs. In this situation, the energy from the Psynergy helps to freeze large areas. Using Cold Snap on the snowflake designs in the Alchemy Forge will reverse the Forge's power, allowing the Forge to create the fluffy Zol clouds necessary for traveling through the Clouds of Passaj.

General: Among Psynergies, the Cold Snap series is unusual in that all three stages are available as soon as the appropriate item is equipped. This means that an Adept can potentially have access to the powerful Frostbite long before they can learn a Psynergy of equivalent power. The Cold Snap series is stronger than the Frost series it replaces, though Coldforge and Frostbite are more powerful. Frostbite is generally outmatched in terms of endgame power by Ice Missile or Freeze Prism. However its unique availability means that it is useful long before either Psynergy is available. In addition, the Adept is guaranteed to have a decent Mercury series regardless of their current class.

Golden Sun: Dark Dawn: While both Amiti and Rief can learn the Cold Snap series, Rief generally profits more. In his base Water Seer class series, Rief has access to few offensive Psynergies. The more powerful Psynergies are usually not available until much later in the game. Learning the Cold Snap series helps to mitigate this weakness by providing him another series of Psynergy. Should he be in the Hermit or White Mage classes, the series helps mitigate the long dry spells between new Psynergies that each class possesses. Amiti, on the other hand, has more offensive options available to him, including the Diamond Dust pair and the Cool Psynergy series, as well as his decent Attack.

Also worth considering is the relative power of Frostbite in comparison to when it becomes available. For example, both Amiti and Rief learn Deluge, which has similar effectiveness to Frostbite, at Level 30. Meanwhile, Frostbite is available as soon as the Ice Queen item is obtained; depending on how much the player has leveled up for the boss battle against the Ice Queen, this may be 10 or so levels earlier. Unlike Tyrell and the Arid Heat series, Rief's naturally high PP allows him to easily exploit Frostbite's power during the earlier parts of the game.

Like several Psynergies, certain members of the Cold Snap series can be used by enemies. Specifically, the Ice Queen uses Frostbite as part of her arsenal.