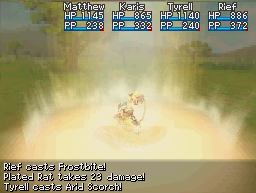 "This fire-based Psynergy can evaporate a water source in the blink of an eye."

Arid Heat, Arid Blast, and Arid Scorch are offensive, ranged Psynergies. The damage done by each stage is determined by comparing the user's Mars Power to the target's Mars Resistance, then multiplying this factor by the base power of the particular Psynergy in use.

Elemental Power attacks such as the Arid Heat series use a set base power as the base damage to be modified. For example, the base power of Arid Scorch is 120. Thus, an unmodified Arid Scorch would do around 120 points of damage.

The Arid Heat series's attack takes this base damage value and uses it in the following equation:

To word this in prose, The Arid Heat series takes the base damage of the particular attack, and then modifies this by how much higher or lower the user's Mars Power is than the target's Mars Resistance. The difference between the user's Mars Power and the target's Mars Resistance is then divided by 200, then 1 is added to this, resulting in what can be called the "elemental damage multiplier". This number is what the Psynergies' damage is multiplied by.

For example, if an Adept with a Mars Power of 150 casts Arid Scorch on a monster with a Mars Resistance of 50:

Therefore, an Arid Scorch cast under these circumstances would deal approximately 180 points of damage to the targeted enemy. Since Arid Scorch is a ranged Psynergy, adjacent targets take a percentage of the total damage, with the percentage decreasing as distance from the main target increases.

As a Utility Psynergy[edit | edit source] 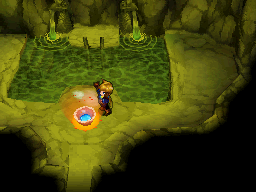 Arid Heat can evaporate the water out of a small, self-contained water source, like a bowl.

Arid Heat, the first Psynergy in the series, is an important Utility Psynergy in Golden Sun: Dark Dawn. It allows players to evaporate water out of small bowls; in most cases, this helps to manipulate the water levels in the surrounding area. Because of this, it draws comparisons with the Parch Psynergy of Golden Sun: The Lost Age, the main difference being elemental alignment. Its range is fairly limited; the player must be within a short radius of the target to use Arid Heat. The effects of Arid Heat can be easily reversed using the Douse Psynergy.

Like many Utility Psynergies in the game, the use of Arid Heat is limited to Mars Adepts, the only Adepts that can equip the Sand Prince Stone that bestows the Psynergy. In-game, it is described as utilizing the power of the Sand Prince, a being which resided behind the Alchemy Well in Ayuthay. Arid Heat is specifically required to reverse the flow of the Alchemy Well, which grants access to Barai Temple.

General: The main advantage of the Arid Heat series is its ability to remain accessible across many classes. The series has fairly strong power, making it excellent for Mars Adepts that are in a class that has few or weaker Mars Psynergies. In comparison to other Psynergies of similar power, the Arid Heat series is fairly cheap, making it an efficient source of damage.

Golden Sun: Dark Dawn: Tyrell is the only Mars Adept in the party when Arid Heat is acquired, so he will be the most common source of the Arid Heat series. Since he can learn the entire series at once, he will have access to Arid Scorch around level 12-15. In comparison, he will not learn a stronger multi-target Psynergy in his base class until level 40, when he learns Supernova. Early on, however, his use of the stronger stages is limited by his poor PP pool. During the later portions of the game, however, Arid Scorch becomes an efficient source of damage, being nearly half as costly as Supernova and Pyroclasm for an only slightly lower base power. Thus, Arid Scorch is extremely useful when the player is in situations where Tyrell would need to use a multi-target Psynergy but still conserve PP.

As the source of the Arid Heat series, the Sand Prince has access to the Arid Blast Psynergy when he is battled.