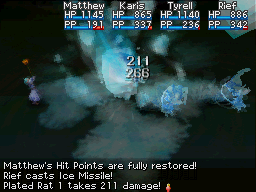 Ice, Ice Horn, and Ice Missile are offensive, ranged Psynergies. The total damage inflicted is determined by comparing the caster's Mercury Power to the target's Mercury Resistance and using this number to modify the base power of the particular Psynergy in use.

Visually, the Ice series features a mass of ice spikes forming in the sky and falling diagonally to strike the targets. The number and size of the ice spikes increase with each stage.

Elemental Power attacks such as Ice, Ice Horn, and Ice Missile use a set base power as the base damage to be modified. For example, the base power of Ice Missile is 160. Thus, an unmodified Ice Missile would do around 160 points of damage.

Attacks from each stage of the Ice series take this base damage value and uses it in the following equation:

To word this in prose, Ice, Ice Horn, and Ice Missile take the base damage of the particular attack, and then modify it by how much higher or lower the user's Mercury Power is than the target's Mercury Resistance. The difference between the user's Mercury Power and the target's Mercury Resistance is then divided by 200, then 1 is added to this, resulting in what can be called the "elemental damage multiplier". This number is what the Psynergies' damage is multiplied by. 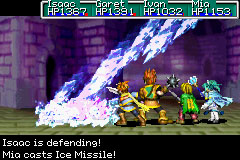 Ice Missile being cast in the GBA games.

Therefore, a Ice Missile cast under these circumstances would deal approximately 240 points of damage to the targeted enemy. Since Ice Missile is a ranged Psynergy, adjacent targets take a percentage of the total damage, with the percentage decreasing as distance from the main target increases.

General: The Ice series is the most powerful series available to the Water Seer class. In this way, it is often compared to the Mariner class series's Cool Psynergy series. The main difference is that Ice Missile is more cost-effective, being less expensive and yet similarly powered to Cool, and has a more limited range. Due to the Water Seer's limited Psynergy lineup, Ice Missile ends up being the most commonly used offensive Psynergy, due to its power in comparison to the Frost/Douse series.

Golden Sun and Golden Sun: The Lost Age: Mia will know Ice when she joins Isaac's party, and as the only Water Seer in either game, remains the source of the series. Ice Horn can be an excellent offensive option during the first game, but will be replaced by Glacier by the end, due to the large level difference between Ice Horn and Ice Missile. In The Lost Age, Ice Missile will be Mia's main attack by the end of the game, and can do a great deal of damage to the Mercury-weak monsters at Magma Rock and Mars Lighthouse.

Golden Sun: Dark Dawn: Rief will know Ice when he joins the party, and Ice Horn will be extremely useful when learned. As the game progresses, the series is temporarily discarded in favor of Deluge, Drench, and possibly the Cold Snap Psynergy series. However, Ice Missile will still be the strongest option, and can be useful against end-game opponents.

Members of the Ice series are somewhat common amongst enemy Psynergy lineups. Many fightable Mercury Djinn can cast at least one stage of the series. In addition, many randomly encountered monsters can cast a member of the Ice series. The Spirit can cast Ice, while the Horned Ghost and a Mimic can cast Ice Horn. Meanwhile, a Cerebus and another Mimic can cast Ice Missile. Amongst bosses, Ice Missile is among the arsenal of Dark Dawn's Ice Queen, and it is her strongest offensive Psynergy.