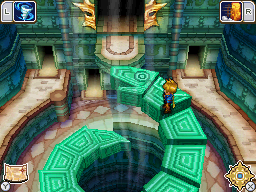 The iconic snake-eating-its-own-tail pattern in the Ouroboros can be uplifted into a spiraling stairwell leading to the Sol Mask.

The Ouroboros (ウロボロス遺跡 Ouroboros Ruins) is a labyrinth, located under Kaocho. It was built by the ancient Exathi of current day Ayuthay to hide the Sol Mask. It is said to ensnare anyone who enters. 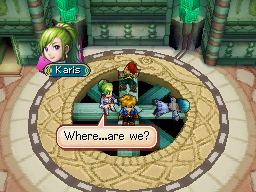 that is disconnected from the path to the Sol Mask.]]The Ouroboros was built sometime in Weyard's ancient past by the Exathi ancestors of modern-day Ayuthay. The Exathi of Ayuthay were noted stonecarvers, thus, the Ouroboros features stone architecture, as well as Zol, which was heavily used by the Exathi. Additionally, the Ouroboros features a noticeable snake theme, with snake statues and a zol staircase carved in the shape of a snake. At some point, the Sol Mask, a necessary component of the Alchemy Forge owned by Ayuthay's ally Passaj, was hidden in the depths of the labyrinth.

In modern times, the Ouroboros now lies hidden beneath the city of Kaocho. King Wo, founder of Kaocho, built his city upon the ruins. Though his initial reason for choosing the site are not described in detail, he had expressed a wish of eventually gaining the Sol Mask within. It had been suggested that he wished to take Passaj's Alchemy Forge for himself. At some point, Kaocho would ask Ayuthay, the creators of the Ouroboros for advice, but Ayuthay refused to tell. Over the years, many people would attempt to explore the Ouroboros but none would emerge, giving the labyrinth its dangerous reputation.

Eventually, Matthew and his party would come to Kaocho in an attempt to gain the Sol Mask to complete Passaj's Alchemy Forge. Upon hearing of the Adepts' arrival, King Wo would attempt to enlist them in his own search. When the party refused, King Wo attempted to trap them within the ruins, with no way to gain the mask. However, the party was eventually able to escape, and traveled to Ayuthay in an attempt to learn the true way to enter.

In Ayuthay, the party was able to learn that the Ouroboros had a secret entrance only accessible via the Insight Psynergy. The party would eventually gain the Insight Psynergy, which would be wielded by Amiti, a Mercury Adept who was the prince of Ayuthay. Amiti would travel to Kaocho with Matthew's party, and helped them to enter the labyrinth properly. Eventually, the party would obtain the Sol Mask, which they secretly returned to Passaj. 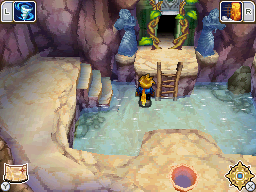 The entrance to the path within the Ouroboros that truly leads to the Sol Mask lies in a cave located on the northeastern corner of Kaocho and requires the Tree Flute to open up.

After the cutscene in the palace at Kaocho drops you into the Ouroboros dungeon, you are dropped into a very limited area of the dungeon, and follow its path back outside. You start out on the blades of a giant fan on the floor; take the northwest exit, and follow the linear path until you get to a hallway with multiple cobra-head statues visible. Push the right cobra head in front of you left, then walk left below the rest of the cobra heads and cast Move on the head that has a glowing yellow door behind it. In the next, cavernous screen, cast Growth on the plant and climb it to return to the cave area connected to the entrance at the upper east of the area in Kaocho with the palace, and leave town.

After having obtained Amiti, return to the cave area east of the palace in Kaocho, then go to the cave room with a lake in it. After a short cutscene shows you're supposed to use the Tree Flute at the wall above the lake, cast Arid Heat on the pot to empty the lake, then use the Tree Flute to make a doorway appear. Enter it to enter the actual Ouroboros dungeon. Climb down the stairs into the large room that has a green, coiled snake pattern at its circular center; the exit at the bottom of the room connects to a dead-end in Kaocho Palace, while the doorway on the ground level just above the snake pattern is merely the exit from an elevator system you will be taking up to return to this room later. Therefore, enter the upper right doorway.

Climb down the stairs right, then pass by a series of hoppable platforms above an abyss with a chest nearby. Take the door down to a big room, and cast Whirlwind on the giant Zol cube to turn it into a platform that will only stay aloft temporarily. To get to the previous chest, take the path north of the zol cube, walk all the way right, Move the rightmost cobra head statue out of the way, and enter the doorway behind. Then, hop up twice, left twice, up once, left once, down once, and left once to get to the chest, which contains the Ixion Mail. Return to the previous room, slide down the wall slide, and follow the lower path down into the hallway area below. A Cobra Head statue here will extend its red tongue to block your path west, and a Glyph tablet underneath will tell you that this tongue is burned off with the Fireball Psynergy, so do that now. In the subsequent room with the large circular chasm, while heading toward the left exit, inspect the chest here for a Mimic battle that will reward you with a Psy Crystal. 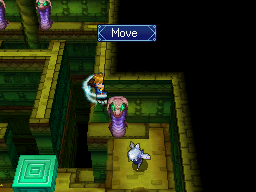 Vortex is found in the appropriate dungeon of the Ouroboros, explored once Amiti has joined.

In the next room, burn the tongue that extends out, climb down the ladder, Whirlwind the Zol cube, and hop left across it. To get the chest at the left end of the room, climb down and Whirlwind the left Zol Cube, then while standing on it, quickly Fireball the next tongue. You obtain the Vulcan Axe. Cross into the room north, where a Jupiter Djinni is visible. Whirlwind the Zol cube, then quickly climb the ladder to the left and hop your way to it, and walk north onto the elevated path. To get the Djinni, the Cobra Head facing you down this path should be moved left, and then you should press down against the small green pyramid tile northwest of the Djinni. Cast Move several times to Move the cobra head three spaces left so that it falls down to ground level. Slide back down to the ground level via the west slide, then push the Zol cube right so that it stops against the cobra head. Whirlwind it here, then hop east across it to reach the Djinni. Battle it to earn Vortex. Take the room's north exit.

Climb down the stairs into the next room, hop right across a suspended Zol cube, and enter the large room with the fan blades that was originally visited much earlier. The Glyph tablet here hints at you to cast Whirlwind on the fan on the wall, which will cause the giant fan on the floor to spin, and the coiled snake pattern several floors above will elevate to become a winding stairwell. Return onto the suspended Zol cube, which immediately serves its purpose as the elevator back to the room with the coiled snake stairs. Climb it into the final room of the dungeon, where a chest contains the important Sol Mask item. After a cutscene, cast the Retreat Psynergy to leave the dungeon.

The name ouroboros is Greek ("ουροβóρος") and means tail-eater. In real world mythology it is often depicted as a snake or dragon biting its own tail. It symbolizes the eternal cycle of nature. See Wikipedia for more information.

Interesting, the name of the Labyrinth may also be connected to the Neox Jenei who commissioned it as well. The Japanese name of the Neox is オロス, possibly meant to be read as Ouros. This might shed further light on the nature of the Neox as well.