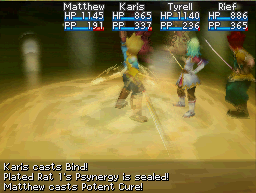 Cure (キュア), Cure Well (キュアライト, Cure Light), and Potent Cure (キュアベスト, Cure Best), make up a series of Venus-based Support-class Psynergy featured in all games. This is the first healing Psynergy the player will get to use in each game.

The Cure Psynergies restore a set amount of Hit Points to a single Adept that has not fallen. When used during battle, only members of the actively battling party can be targeted. The amount of HP recovered depends on the Venus Power of the caster, as well as the actually Psynergy being used.

The visual effects vary from one stage of the series to another. In Golden Sun and Golden Sun: The Lost Age, golden orbs of energy rise up the ground and spiral around the target before entering the targeted Adept. The number of orbs increases with each successive stage. Golden Sun: Dark Dawn retains these orbs, but shows them rising from a golden, circular energy field. The energy field grows larger with each successive stage. When casting Potent Cure, a design can be seen in the energy field.

As previously stated, the exact strength of the Cure Psynergies depend on the caster's Venus Power. To be specific, the outcome can be represented with the following formula: 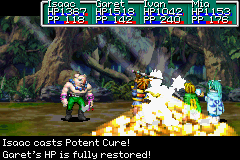 General: The Cure Psynergies are the weakest of the three single target series, but are among the earliest available. Helping their usage is the fact that they are always available to the main playable character of the respective game, guaranteeing a source of single-target healing. This makes the playable Venus Adept the main source of early healing in any game. However, as time passes, the Cure Psynergies are outclassed by the Ply Psynergy series as well as multi-target healing series like Wish.

Golden Sun: The Cure series is the only source of Psynergy-based healing until Mia joins the party at Mercury Lighthouse. Thus, it is liable to see a great deal of usage during the early game. Even afterwards, the limited PP at this point means that Cure will still be seen in combination with Ply. Once Ply Well and Wish are learned, however, they will become the main source of healing.

Golden Sun: The Lost Age: While Cure remains an early source of healing, it is not the only one. Due to the earlier availability of Mercury Djinn, Ply can be accessed much earlier should the player take advantage of class changes, although it depends on when Sour or Chill are reached. Otherwise, Cure remains the only source of healing until Piers joins the party in Kibombo.

Golden Sun: Dark Dawn: Cure will be a main healing source during the first dungeon. However, the player will gain access to the multi-target Fresh Breeze before battling the Dim Dragon, allowing for more efficient healing. However, Cure can still be used to patch up a single Adept until Rief and Amiti, who both know the more efficient Ply, join. At this point, Cure's main advantage is that it is learned earlier than the Ply series. However, that advantage is negated once Sveta joins. She has access to the Boon Psynergy series, which is not only stronger, but learned at the same levels as the Cure series. Thus, the Cure series will likely see little use after this point.