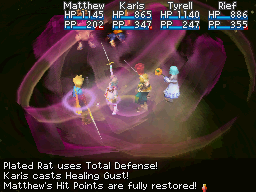 The Fresh Breeze Psynergies restore Hit Points to all party members that haven't fallen; if used during battle, they only affect currently-battling party members. The amount of HP recovered depends on the caster's Jupiter Power, as well as which Psynergy is actually used.

The visual effects vary from one stage in the series to another. Each stage features a light-purple, circular field on the ground under the party's feet. From the field a purple gust of wind swirls around the party, eventually entering each party member. Each stage features a larger wind gust. Healing Gust, the strongest stage, features a light-purple translucent flower blooming from the circular field while the wind is gusting.

As previously stated, the exact strength of the Fresh Breeze Psynergies depend on the caster's Jupiter Power. To be specific, the outcome can be represented with the following formula:

General: The Fresh Breeze series is an interesting addition to the array of mass-healing Psynergies. Though the weakest of the three major mass healing groups, it is the only mass-healing series that requires no set Djinn. The series has a fairly low PP requirement, and thus the series is fairly efficient. It is generally used in situations prior to the player acquiring the necessary Mercury Djinn to access the Wish series. Despite being outclassed in power by the Wish series, the Fresh Breeze series still remains useful, as the more powerful stages are learned earlier.