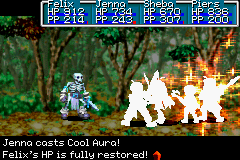 Multi-target healing spells are among the games most useful Psynergies.

Hit Points (HP for short) is a statistic that is a measure of an Adept's health used in the Golden Sun series. These are incredibly important because when an Adept's HP reaches zero the Adept is downed and can no longer participate in the battle or receive experience points after battle.

The number of HP an Adept has depends on class and level, among other things. The max HP an Adept can have is 1,999. Classes that have high bonuses include:

During battle there many ways to recover HP.

The first way is through items, and early in the game this may be the most viable route. The items that can be used to restore health are:

In Dark Dawn, new HP-restoring items are introduced including:

Additionally, some items have "use" effects that restore health:

Some Djinn can restore health. They are:

A few summons can restore health:

The final way is through Psynergy. The Psynergy spells that restore health are:

Like Adepts, all enemies have HP as well, and similarly affect the battle. Like Adepts, when an enemy's HP reaches zero it is no longer able to battle and is felled. The max HP for an enemy is 16,383, which none of the enemies have in the default difficulty level. This HP cap is achieved only in the Hard Mode where all enemies get 1.5x the amount of HP: Both Valukar and Dullahan, two optional bosses, reach this maximum. Also, the game handles the Doom Dragon as essentially three enemies in one battle, so it could potentially have 19,800 HP (Three head stage with 7500, two head stage with 6300, and one head stage with 6000).