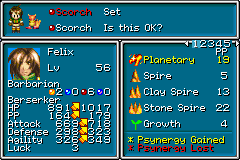 Changing the amount or combination of an Adept's Set Djinni may cause their class to change, which can have averse effects on their statistics or Psynergy.

A Character class is a gameplay-based method many RPGs use to arbitrate the capabilities of playable characters. In Golden Sun, Golden Sun: The Lost Age and Golden Sun: Dark Dawn, character classes serve just this purpose, dictating enhancements to characters' base statistics and what arrangements and elements of Psynergy they may use.

Unlike many RPGs, such as Final Fantasy, characters in Golden Sun games do not specifically select classes to pursue and develop abilities in; Classes are merely "settings" that can be instantly changed anytime based on what their level of skill in a particular element is. This is determined both by their own innate element, as well as how many and what elements of Djinn are Set onto each character.

Classes serve several important roles from a gameplay perspective. Firstly, they add a great deal of diversity to the game, opening up a large number of Psynergy and statistical (and hence strategic) combinations. Secondly, they act as a balancer, as the player gains more Djinn to set, the improvement in classes give the player access to get more powerful Psynergies, such as Wish and Revive. This both serves as an incentive for the player to collect Djinn (and hence complete the associated optional, but more complex, puzzles) and acting to stop the player gaining spells that are too powerful too early on. Because of this, the player's selection of classes can aversely change the outcome of a battle. This is most evident when the Enemy Ability Djinn Storm is used on the player. The removal of all Djinn cripples an otherwise strong party by reverting the Adepts to their default classes, which serves to make the battle much more challenging. By extension, this is also a feature that balances the powerful summon sequences, as putting a Djinni on Standby stops it from influencing an Adept's class, hence weakening the party, which in turns creates a tactical dilemma that forces the player to think more carefully about their actions.

It should be noted that the statistic numbers (such as 190% health for Slayer class) are multipliers of a base number each individual adept has. For example, when it says that during a level up Isaac's health increased by 7, but a comparison of his max health shows that it increased by 13, Isaac's base health increased by 7, which was then multiplied by 1.9 resulting in the apparent increase by 13. Example, Isaac, a Slayer has base health of 100, his visible health in combat appears to be 190. He gains 7 health with a level up, now has a base health of 107, his visible health is now 203. Stat modifying items like Apples or Cookies are applied to base, and then multiplied through, hence the reason they sometimes appear to give larger boosts to some and smaller boosts to others.

It should also be noted that this does not influence a character's base growth like it does in some Final Fantasy games (like the Tactics series where having a character develop as a Paladin for some levels will result in high health and high defense, then leveling that same character as Fighter will result in a high attack growth, eventually turning the character into something of a one man wrecking crew). Having someone like Ivan as something like a Tamer to boost his attack and health stats, then switching him to something like a Hermit to give him a hefty PP boost while maintaining the attack of the Tamer class will not work. Base statistic growth is tied to the individual Adept and is constant regardless of class.

In terms of attack and defense, weapons and armor are added to the base before the multiplier. So the attack stat, for example, is (Base Attack + Equipped Weapon and Armor attack bonuses) * Multiplier.

There are five "trees" of classes: Mono-Element, Dual-Element, Tri-Element, Item Dependent (The Lost Age only), and Psynergy Dependent (Dark Dawn only). The "number" of elements includes the elements of Djinn set to the Adept, as well as the Adept's base element. For example, the tri-elemental Ninja class series for Isaac requires Jupiter and Mars Djinn, but also includes his natural Venus element, thus it is considered "Tri-Elemental".

The Mono-Element classes (also called the "Default" classes) involve having only one element of Djinn to a particular Adept and that element is the element the Adept is aligned with (Water for Mia and Piers, Fire for Garet and Jenna, etc.) and all through the progression of the class, only one type of Element is needed. The classes stem from the base class of the character (EG: Felix and Isaac being Squires follow the Squire class tree.)

The Dual-Element classes require having a majority of Djinn from another element, and one or two Djinn of the Adept's own element for the higher levels. It should be noted that classes that combine symbiotic elements (Earth-Fire, Wind-Water) function slightly differently from the others. See the respective class pages for more information.

Pros of the Dual-Element Classes[edit]

Cons of the Dual-Element Classes[edit]

The Tri-Element classes require two different types of Djinn attached to the Adept, neither belonging to that Adept's element. One of those elements is the symbiotic element of the adept in question (Venus and Mars, Mercury and Jupiter) and one other element that is not the Adept's base element. The exception being if you're attempting to use a partial class, in which case six of one of the non-symbiotic elements Djinn and three of the other non-symbiotic element are required. See the individual class pages for more information.

The item dependent classes require the item that grants the class to be equipped (Trainer's Whip for Tamer class series, Mysterious Card for Pierrot class series and Tomegathericon for Dark Mage class series) and 1, 2, or 3 (for the 2nd, 3rd and 4th levels) Djinn of each Element that is NOT the Adept's base element.

One thing to take note of with the Item Dependent classes it that they require three elements worth of Djinn to progress. Even with all 72 Djinn, 8 Adepts, and 3 items, it's still going to leave an awkward amount of Djinn floating around. Normally, when you're trading Djinn around into Dual and/or Tri elemental classes, you have enough Djinn floating around to get everyone to the top level tiers of the classes. When dealing with the Item-Dependent classes, at least one Adept is going to get a little shafted. It is possible, however, to avoid this with careful Djinn allocation, though it will often take a lot of time to set up. Formations of all 72 Djinn that involve all 3 Item Dependents without shuttling someone into a non-zenith class or duplicating class changing items can be formed however. The following is an example of how such arrangements can be made:

There are other workable arrangements as well. The following is an example that doesn't follow the above pattern:

Psynergy Dependent classes is a set of classes currently unique to Dark Dawn where casting a specific psynergy spell in combat activates the class. Currently, there is only one class series of this type and only one character can use it. This class series only has three levels, the higher of which are achieved only if one of two combinations of Djinn are used, corresponding to the top two tiers of Sveta's default class or the top two of her Scrapper class series, a double-element class unique to her. In addition to determining the character's stats and psynergy, this class also alters, adds, replaces or disables various commands that the character has access to, and changes the character's appearance for as long as its in effect. The class can't be manually deactivated, and will only shut down if Sveta is downed, the battle ends, a number of turns passes equal to the number of set Djinn she has, or she is hit with either Djinn Blast or Djinn Storm.

When trading Djinn around to change classes, it's generally best to pick one tree for one set (One Venus, one Mars, one Jupiter and one Mercury) of Adepts. For example, have Isaac, Jenna, Sheba and Mia in Tri-Elemental classes while having Felix, Garet, Ivan and Piers in Dual-Elemental classes, or both in Tri, or both in Dual, or any combination thereof. This helps to ensure that there are enough Djinn floating around to get everyone to the top tier of whatever class series you desire the Adepts to be in.

The classes that you pick for your team of Adepts are based entirely on your personal likes, dislikes, goals, objectives, feelings and preferences. Do you think Jenna seems more "Ninja-ish" than "Samurai-ish"? Or do you think she seems more "Page-ish"? Experiment a bit and see what strikes your fancy.

There are a huge number of setups and configurations when it comes to choosing which classes you want your Adepts to be. Too many in fact, to list on a page. However, some members have taken the time to make personal pages with their own opinions on the subject: