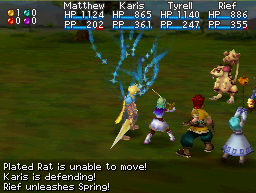 When Set, Spring increases base HP by 11 and base Psynergy Points by 5.

When Spring is unleashed in battle, the user heals one of the currently active and battling party members by an amount equal to 70% of their maximum HP.

In The Lost Age, Spring's unleash animation visually resembles the user summoning the blue transparent image of a Mercury Djinni above the target, and the Djinni briefly hovers around as a collection of blue glitter gathers into the target. In Dark Dawn, the 3D model of Spring appears in front of the user briefly, then after a moment a similar collection of blue glitter gathers into the targeted Adept at roughly the same speed. 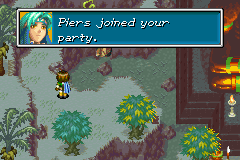 Spring is automatically Set onto Piers when he first joins your party.

Golden Sun: The Lost Age: Spring is a Djinni that is automatically handed to you as you play through the game, being present on Piers as soon as he joins your party in the town of Kibombo somewhat early on in The Lost Age. Spring is one of three Djinn in The Lost Age - the others being Echo and another Mercury Djinni in Piers' possession, Shade - that is impossible not to obtain. 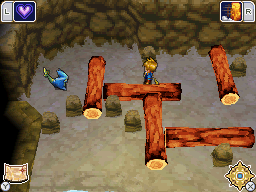 Spring is found in the small cave near the west exit of Harun Village.

General: There are very few healing effects in any of the games that restore HP based on a percentage. Spring, the only Djinni that restores HP by 70% of the target's maximum HP, can be useful at times, and is more useful than a Djinni like Fizz which restores only by 60% of the target's maximum HP. Nonetheless, there are other Djinn that heal by a percentage which either heal by a larger percentage or offer some separate advantage to make up for not healing as much, like group healing or acting with increased priority. Unless you are planning to set up for a Mercury-element summon by unleashing Spring to heal an Adept's HP, the Ply Psynergy series is probably overall better despite the PP cost. 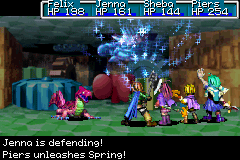 Golden Sun: The Lost Age: While this may appear practical as a battle option, Spring may not prove itself the most useful healing option for when it can first be found because of the abundance of easy-to-use and direct healing items and Psynergy available. Since Spring cures HP based on the maximum HP meter - making its worth grow over the course of the game as the Adepts gain more HP - Spring may be more significant than other forms of HP recovery at times, but the party's items and Psynergy will increase over time as well. There will be cases where using Spring won't cure as well as a dose of Ply would, and that it saves a little PP does not seem enough of an advantage to make up for that. Nonetheless, it must also be said that it could be used simply because it is a Djinni, and therefore more helpful than any healing Psynergy when the player is setting up for a summon.

Golden Sun: Dark Dawn: Spring is a far iffier and less significant healing Djinni in this game because it is found in roughly the last third of the game, unlike when it is given to you in the first third of the previous game. Not only that, it is basically obsoleted by the Mercury Djinni Coral found earlier in Port Rago, which restores all currently active party members by 50% of their respective maximum HP meters.

A spring is a small release of water from the earth.