In Dark Dawn, Spark appears as one of the "extra Djinn" in the Djinn Guide because of its temporary appearance in the earliest stage of the game. 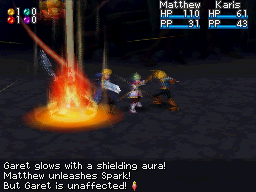 "Usually revives a downed ally by warming up." ~Dark Dawn

When Set, Spark increases its Adept's base HP by 11 and base Psynergy Points by 6.

When Spark is unleashed in battle, the selected Downed Adept has a 70% chance to be revived, and their HP restored to 60% of their maximum HP.

In The Lost Age, Spark's unleash animation visually resembles the user summoning a glowing, transparent image of a Mars Djinni that hovers above the party briefly, then a red-colored version of the same visual as the Revive Psynergy - several glowing red images of feathers float down to the target's position, and then the target is engulfed in a vertical beam of red energy briefly. In Dark Dawn, when the user summons the 3D model of Spark, the field and background turns black, and several different fiery effects occur at the user's position, including an effect that rotates above the user that can best be described as resembling an orange ninja star, and the user is partially engulfed in a fiery field from the ground up to the body. 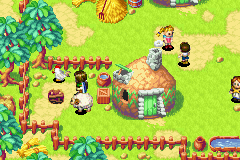 Cast Scoop in this tiny farm to gain access to the tunnel that leads to Spark at the north end of Mikasalla.

Golden Sun: The Lost Age: Spark is located in the town of Mikasalla, in a separate screen north of the main town where it is visible just by walking up to the top. It is only reachable, however, with the Scoop Psynergy earned from a boss fight in Yampi Desert; go to the tiny ranch with the chicken and sheep in the lower left corner of the town, and cast Scoop in the exact center to open up a ladder, which leads to an underground cave trail. Following it leads you to the Djinni, which you can pick up without a fight.

Golden Sun: Dark Dawn: Spark is one of the six Djinn that Isaac and Garet loan Matthew and Karis while in Tanglewood, meaning that the player may use it while exploring Tanglewood, the Abandoned Mine beyond that, and the Tangle Bloom boss fight at the end. After this, Spark and the other Djinn are permanently returned to Isaac and Garet for the rest of the game. 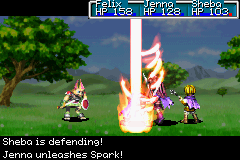 "Revive an ally with cheers of support." ~The Lost Age

Golden Sun: The Lost Age: Spark is essentially meant to be this game's rough equivalent to Quartz in the original game, for both Djinn are found relatively early in their games and serve the brief purpose of being unreliable but basically the only forms of reviving the party has to outside of expensive Waters of Life. Spark has two core advantages over Quartz besides the stronger effect: It is a Mars Djinni, so it typically will be set onto Jenna, who is not the Adept most used for physical attacking, which is the Venus Adept Felix. And while Quartz is found quite some time into the first game because it is that game's third Venus Djinni, Spark is found earlier in The Lost Age, as the second Mars Djinni. While the Revive Psynergy will become available much later, Spark is actually the only reviving Djinni for much of the game, until the Great Western Sea is finally reached. The Mars Djinni Tinder, the best single-target reviving Djinni because it is as powerful and accurate as Revive and a Water of Life, may be gotten at Hesperia Settlement as soon as the Great Western Sea is first accessed.

Golden Sun: Dark Dawn: In Spark's temporary appearance in the game's opening segment, it is a better and manually-selectable alternative to the Venus Djinni Quartz that Isaac will automatically use if either Matthew or Karis are Downed. Given the nature of the opening part of the game as something that cannot be lost, that the party has two separate inaccurately-reviving Djinn is trivial at best because the boss encounter with the Tangle Bloom at the end is impossible to lose. In the main game, the Mars Djinni Cinder and the Mercury Djinni Teardrop are this Djinni's identical equivalents.

A spark is a small piece of fire used to start larger fires. Guts can be used to refer to vigor, in line with Spark's reviving properties.

The manual to the North American version of The Lost Age incorrectly names this Djinni "Guts".