Torrent is the ninth Mercury Djinni in Dark Dawn. 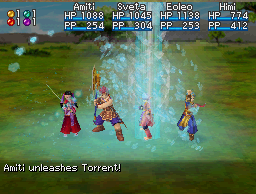 "Boost party Agility with a surge of energy." ~Dark Dawn

When set, Torrent increases base HP by 9, base Defense by 2, base Agility by 2, and base Luck by 1.

When Torrent is unleashed in battle, all currently active and alive Adepts get their Agility ratings temporarily buffed to +100%, the maximum agility bonus possible. It doubles everyone's speed, in other words.

In Dark Dawn, Torrent's unleash animation visually resembles the user summoning the 3D model of Torrent above himself or herself briefly. After Torrent disappears in a blue flash, each receiving Adept in the party receives a complex effect: the Adept is briefly encased in a rotating field of blue, vaguely leaf-like objects at the same time a light blue, translucent, multipart beam erupts through the Adept upward off the screen. After this has disappeared, the Adept is then surrounded by a field of translucent cyan flame briefly, just like the visual of the Jupiter Djinni Fleet. 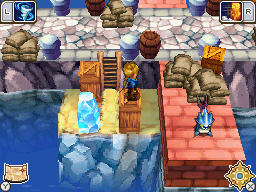 Torrent is found at the port screen in Belinsk.

Golden Sun: Dark Dawn: Torrent is located at the upper right port screen of the settlement of Belinsk, and can be gotten as soon as Belinsk is first entered. Go to the port, and you can see Torrent below a bunch of sacks that block your way to it. Climb down the ladder left of it, cast Cold Snap Psynergy on the puddle, move the tall crate to the upper left of it one space right, and move the tall crate to the upper right of it two spaces down and one space left. Climb up the ladder and hop across these to get Torrent easily. Unlike most Djinn in the Morgal region that are missable, Torrent remains available to get up until the very moment you decide to permanently leave Belinsk on the sailing ship, because the final scenes in Belinsk take place in the very same screen. If you answer yes to Eoleo's question "Time to push off?" while Torrent is still uncollected south of the ship, Torrent will be permanently missed.

General: Using a turn to double all Adepts' agility ratings basically solves all possible issues of each one of your Adepts not moving before the enemy in a given turn, for several turns. Depending on the boss, this can be highly useful, though it can be argued that a Djinni that halves all enemy Agility ratings is the same, such as the Venus Djinni Vine. There is one advantage the latter has over doubling party agility, though; since the agility boost counts as a buff, it can be removed by the Break Psynergy if the boss has it. But a Djinni that halves the enemy's Agility is something that no enemy in any game can dispel from themselves. In the GBA games, identical equivalents to Torrent are the Jupiter Djinni Zephyr and the Mars Djinni Coal.

Golden Sun: Dark Dawn: Torrent is the first of two Djinn that have this party-agility-doubling effect that is found within this game's collection of Djinn, the second being the Jupiter Djinni Fleet. At the end of the Morgal segment Sveta joins your party in Belinsk Ruins and brings Fleet along with her, whereas Torrent can be found the first time Belinsk can be entered. This means more of the game is available for Torrent to be used in than Fleet, but in practical terms this is mostly irrelevant - random battles and bosses are easy enough up until the endgame that it is fairly pointless to increase your party agility. It is only when fighting the final boss and optional bosses where bending agility in your favor can be a worthwhile way to use up an Adept's action in a given turn, and in this regard Torrent and Fleet are interchangeable. Against Star Magician, for example, you can double your party's agility rating in the first turn, then on the following turn use Doldrum / Ivy on the Guardian Ball so that you prevent its protection of the Star Magician and ensure that your party can unleash a massive summon rush without the damage being prevented.