Pincer is the thirteenth Mercury Djinni in Dark Dawn. 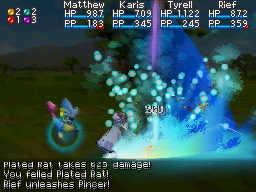 When Set, Pincer increases base HP by 9, base Psynergy Points by 3, base Attack by 4, and base Defense by 3.

When Pincer is unleashed in battle, the user deals a Mercury-based attack equal in power to the user's normal physical attack with an additional 60 damage points added to the result. Then there is a chance the target's Resistances will be lowered by 40 ("two stages", the same amount as the Weaken Psynergy. The most Resistances can be lowered down by is 80, as in "four stages".)

In Dark Dawn, Pincer's unleash animation visually resembles the user leaping through the air to perform a physical attack, and while in midair the motion is turned to slow-motion while light blue energy orbs gather into the user's weapon. The user strikes the target at the same time the 3D model of Pincer appears behind the user briefly, and for around two thirds of a second the ground underneath and behind the target glows with blue-colored fire. Then, an image of a round purple shield forms in front of the enemy and shatters, to indicate the attempt to lower the enemy's resistances has been made.

Pincer's attack then takes this base damage value and uses it in the following equation:

To word this in prose, Pincer takes the base damage of the user's normal physical attack, adds 60 to it, and then this result is modified by how much higher or lower the user's Mercury Power is than the target's Mercury Resistance. The difference between the user's Mercury Power and the target's Mercury Resistance is divided by 400, then 1 is added to this, resulting in what can be called the "elemental damage multiplier". This number is what Pincer's damage is multiplied by.

Therefore, if Pincer were to be unleashed under these circumstances it would deal approximately 184 points of damage. 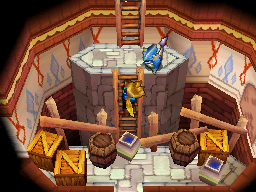 Pincer can be made available in this residence in Belinsk after having come out from the Belinsk Ruins.

Golden Sun: Dark Dawn: Pincer is located in the center-left residence in Belinsk, but it cannot be gotten until you have returned to Belinsk's main town area following your completion of Belinsk Ruins at the end of the Morgal region segment of the game. Since this Djinni will be permanently missed once you elect to fight the monsters on the ship at the town dock to the northeast, you have a very limited portion of the game in which you can get Pincer. Whether it's before or after the start of the Grave Eclipse, enter the ground-level entrance to the left residence and find the elderly couple resting on mattresses, and talk to the male on the upper bed. The NPC will automatically get up, walk out of the room, come back, and mutter something about drinking tea. Go into the kitchen and you will see a puddle in front of the fireplace representing tea that he has spilled. Cast the Douse Psynergy on the fireplace so that when you cast the Cold Snap Psynergy to turn the puddle into an ice pillar, it won't instantly melt. Climb up the ladder on the bookshelf to the right, hop left across the ice pillar, and climb the ladder up into the small area where you can get Pincer right away. Continue climbing up so that you can slide off the residence's roof.

General: Pincer is a pretty good attacking Mercury Djinni because it has a pretty good set damage bonus of 60, which will be useful for any Adept that unleashes it regardless of attack rating. Pincer has a relevantly beneficial side effect to boot; its chance to lower the target's Resistances will increase all damage the target will take from any subsequent attacks that are aligned with any of the element, therefore making the enemy fall faster, even though the difference the resistance drop makes probably isn't all that high.

Golden Sun: Dark Dawn: Pincer, however, is likely to be ignored because other, even stronger attacking Mercury Djinn can have been gotten by this point. Most notable is the Mercury Djinni Serac, which has both a higher set damage bonus of 70 and perhaps the best side effect to an attack, a chance to instantly fell the target. Since the point of lowering a target's Resistances is to get the enemy KO'd faster than otherwise, and since a KO can't theoretically be achieved faster than through an instant-death side effect, Serac can be said to obsolete Pincer in side effect terms just like Serac has a stronger base damage bonus. Furthermore, the Mercury Djinni Spout, which is strictly notable only for its 80-damage bonus, may also be even better than Pincer because it can be relied on to deal its consistently higher damage bonus. Even with these other Djinn in mind, Pincer is technically a solid attacking Djinni that may find some use on an Adept that either does not have the aforementioned attacking Mercury Djinn set or has already Unleashed them in the fight.