Swift is the seventeenth Jupiter Djinni in Dark Dawn. 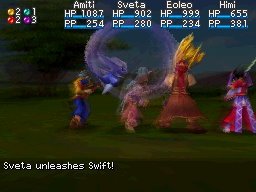 "Use speed of the wind to strike first." ~Dark Dawn

When Set, Swift increases its Adept's base HP by 10, base Attack by 3, and base Defense by 3.

When Swift is unleashed in battle, the user deals a Jupiter-based attack equal in power to the user's normal physical attack with an additional 50 damage points added to the result. This effect has the "strikes first" property, meaning it will be the first performed action in a given turn regardless of the agility rating of the user and any other combatant in battle.

In Dark Dawn, Swift's unleash animation visually resembles the user summoning the 3D model of Swift right behind their head. After a moment, the user leaps to attack the target physically, and Swift stays behind the user's head. While the user is making the leap, a pair of intersecting purple rings arranged as a sphere forms near the user's position and floats horizontally towards the enemy's position, shrinking out of existence.

Swift's attack then takes this base damage value and uses it in the following equation:

Therefore, if Swift were to be unleashed under these circumstances it would deal approximately 168 points of damage. 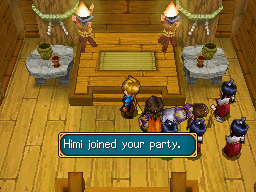 Swift is added to your Djinn collection along with several others when Himi joins your party in Yamata City.

Golden Sun: Dark Dawn: Swift is automatically acquired in a cutscene late in the game. In the palace in Yamata City, when you approach the sleeping Himi while the Third Eye item from Warrior's Hill is in your inventory, story-relevant cutscenes transpire that result in Himi permanently joining your party. She brings with her this Djinni along with five other Djinn - Geode, Buckle, Magnet, Pepper, and Clover.

General: Swift's battle effect is the only effect in any Golden Sun game thus far that acts with increased priority and is an actual attack. Unfortunately, that does not seem to be much of a bonus in the long run - in a typical battle, it generally does not matter whether an attack against an enemy is dealt before or after an enemy's action(s) this turn. There may be some obscure, situational benefits to having the Adept deal an attack before any of the other party members where ordinarily the Adept would attack after the others. Swift may also have the capacity to be useful to an Adept that is slower than an enemy that is about to deal a fatal blow - in this case the Adept can score one last hit with certainty. But the attack itself adds an average 50 bonus damage without any side effect besides the high priority.

Golden Sun: Dark Dawn: Swift is not much of an addition to the party's offensive Djinni collection because for the most part it amounts to being nothing more than a 50-set-bonus-damage attacking Djinni - Sirocco found earlier would probably be a better Djinni because it has 60 bonus damage and a minor side effect of its own, and that in turn is inferior to Simoom, with 70 bonus damage and a strong side effect in the form of inflicting the target with Venom.