Lava is the fourth Mars Djinni in Dark Dawn. 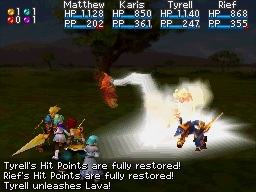 When Set, Lava increases its Adept's base HP by 9, base Attack by 3, and base Agility by 3.

When Lava is unleashed in battle, the user deals a Mars-based attack equal in power to the user's normal physical attack with an additional 60 damage points added to the result. Then, there is a chance that the target will have its Defense rating lowered by 25% temporarily.

In Dark Dawn, Lava's unleash animation visually resembles the user summoning the 3D model of Lava in front of the enemy's face. Lava holds in midair for a moment while the background goes dark and then the screen glows pink, and the Djinni then ejects a stream of white-hot steamy water that pours onto the enemy and lands on the ground in a puddle.

Lava's attack then takes this base damage value and uses it in the following equation:

To word this in prose, Lava takes the base damage of the user's normal physical attack, adds 60 to it, and then this result is modified by how much higher or lower the user's Mars Power is than the target's Mars Resistance. The difference between the user's Mars Power and the target's Mars Resistance is divided by 400, then 1 is added to this, resulting in what can be called the "elemental damage multiplier". This number is what Lava's damage is multiplied by.

For example, if an Adept with an Attack rating of 150 and a Mars Power of 130 unleashes lava on a monster with a defense of 40 and a Mars Resistance of 80:

Therefore, if Lava were to be unleashed under these circumstances it would deal approximately 129 points of damage. 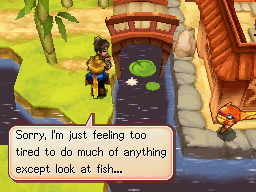 Lava is found in this spot in Kaocho accessible once Amiti is in your party.

Golden Sun: Dark Dawn: Lava resides in the main town area of Kaocho, at a closed-off corner that is easily visible the first time you visit the town, but cannot be gotten until your second visit to the town once Ayuthay has been completed and Amiti has joined the party. By this point, the dim-sum joint south of the weapon and armor shop is opened, so buy a Kaocho Dumpling. Next, talk to the man sitting by the river at the southwest corner of the town, give him the Kaocho Dumpling when prompted, and he will move from his spot. Hop right across the lily pad to claim the Djinni.

General: Lava is a solid attacking Djinni, having a good set damage bonus of 60 and a chance for a good side effect, which is lowering the target's Defense rating. Lowering the target's Defense, and thus raising the damage your party's subsequent physically-based attacks will do to the enemy, is generally a better effect in a random encounter than lowering an enemy's Attack rating or increasing your party's defenses, because you have better control over your capacity to capitalize on the lowered enemy statistic. When an enemy's Defense is lowered, you can focus multiple physical attacks on that enemy afterward make use of the lowered defense, whereas lowering the enemy's attack might not always end up applying itself because the enemy might end up using a power-based move like a Psynergy.

Golden Sun: Dark Dawn: Lava is the next attacking Mars Djinni in the game, following Fever, and Lava is a very large improvement over it by having twice as much of a set damage bonus and a relevant side effect. The next attacking Mars Djinni following Lava is Fury in Te Rya Village, which has 70 bonus damage but a far less relevant side effect, meaning that you may end up considering Lava equal to or even better than Fury. Whichever the case, the only Mars Djinni that can be said to obsolete Lava and Fury with relative certainty is Chili much later in the game. Despite Chili being gotten when it is, the Mars Djinni Sizzle found later in the game after that is, strangely enough, identical in power and side effect to Lava.

Lava is molten rock expelled from a volcano when it erupts. Boiling a liquid is heating it to the point that it turns into vapor.