This Djinni appears as an enemy that can be battled.

Vine (アイヴィ Ivy) is a Venus Djinni found throughout the Golden Sun series. 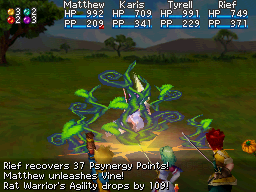 When Vine is unleashed in battle, all enemies' Agility ratings are lowered down to 50% of their normal values, the lowest value the Agility rating can be debuffed down to.

In Golden Sun and The Lost Age, Vine's unleash animation visually resembles the user summoning a glowing, transparent image of a Venus Djinni that disappears immediately above the enemy group, and then a group of wriggling green vines briefly sprout out of the ground at the position of the enemy party and then retract back into the ground. In Dark Dawn, the 3D model of Vine appears and disappears briefly, and a small, yellow-glowing fissure appears under the enemy's feet for a moment. Then a small collection of green, leafy plants grow out of the fissure and hold for a moment. 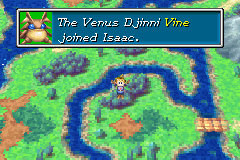 Vine is randomly battled at this "island" west of the west exit of Lamakan Desert.

Golden Sun: Vine is a Djinni that is randomly encountered in a specific area of the overworld that otherwise appears to be pointless scenery. Thus, it is very often missed by players playing the game the first time without any outside information. The battle with Vine may ensue in place of a random battle in the circular "island" to the immediate northwest of where you exit Lamakan Desert, led to by the upper of two bridges that are immediately visible. It can also appear on the larger island just north of crescent shaped one. Furthermore, it may also appear on the strip of land north of the exit between the mountains and the river. See here for enemy statistics.

Golden Sun: The Lost Age: Players can transfer data from Golden Sun to The Lost Age, but even if they don't, Vine will be among the Djinn Isaac's party has with them when they join forces with Felix's party late in the game. 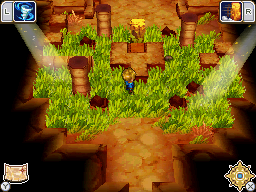 Vine is found late in Teppe Ruins, in a puzzle where you have to shove an earth pillar down.

Golden Sun: Dark Dawn: Vine is found late in the Teppe Ruins, in the room before the room where Sveta is met. It will run away into tall grass , and will run away from the player through the grass for as long as the player tries to catch it, so the player must walk up a ledge to the left of the room and move an earth pillar up one tile into the grass. With this pillar in place, when the player next chases Vine, it will encounter the pillar and position itself up north in the open, and you can grab it without fighting it. Vine will be permanently missed once the Belinsk Ruins dungeon is completed, because the Morgal region will be locked off, preventing your from reentering Teppe Ruins through its exit.

General: Vine being an effect that halves all enemies' agility ratings can be thought of as equivalent to an effect that doubles the whole party's Agility ratings, which other Djinn can do. However, there is one additional benefit that halving enemy agility has: if an enemy has the Break Psynergy, they can't remove their own statistical drops the way they can remove a party's self-inflicted statistical buffs. This essentially lets the entire party move before a particular boss enemy, rather than only part of the party, while the other part of the party moves after the boss' action(s) the current turn. This can be situationally useful in letting an Adept with a group-healing effect use their healing before a boss can fell an Adept low on HP. 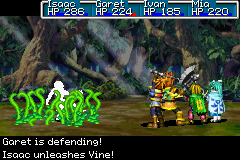 Golden Sun: Vine works particularly well against Deadbeard, who ordinarily removes all buffs you cast upon yourself with Break but does not have any specific measures to remove negative effects from himself. Deadbeard has an agility rating to speak of, so unleashing Vine can be quite useful if some of your party members do not act before Deadbeard's first attack in the turn.

Golden Sun: The Lost Age: When Isaac's party joins Felix's party along with their returning Djinn, Vine's ability makes it a second Mud, a Venus Djinni found in the early-middle of that game with the exact same effect. The two Djinn are usable interchangeably for the same situational purposes.

Golden Sun: Dark Dawn: In general, Agility-modifying effects may not be as useful in Dark Dawn as in previous games because with equipment like the Zol Ring, your party is more likely to move before your opponents anyway. This makes Vine one of the less useful Djinn in the game. However, it may be useful for lowering the agility of a Guardian Ball in the Star Magician fight, so that in the following turn, it can successfully have Ivy or Doldrum used against it to prevent it from using its Guard Aura and allow the party to safely unleash a salvo of summons on Star Magician's whole group. Vine's battle effect is identical to that of the Mercury Djinni Foam, and the two can be used interchangeably.

A vine is a type of plant characterized by climbing up trees or other surfaces as they grow. Ivy is a type of vine that often known to climbs up walls of buildings, but is essentially a synonym to a vine.