This Djinni appears as an enemy that can be battled.

"Poison a foe as you strike."

When Set, Wheeze increases its Adept's base HP by 9, base Psynergy Points by 3, and base Attack by 5.

When Wheeze is unleashed in battle, the user deals a Jupiter-based attack equal in power to the user's normal physical attack with an additional 50 damage points added to the result. Then there is a chance the target will be afflicted with the Venom status condition.

Visually, Wheeze's unleash animation resembles the user leaping forward to perform a normal physical strike, but before the impact the user briefly stops in the air while glowing purple energy orbs gather above the user and form a transparent purple image of a Jupiter Djinni. The Jupiter Djinni disappears into the user's strike at the target, and the impact lets loose a thick, screen-filling mass of white-purple head shapes.

Wheeze's attack then takes this base damage value and uses it in the following equation:

To word this in prose, Wheeze takes the base damage of the user's normal physical attack, adds 50 to it, and then this result is modified by how much higher or lower the user's Jupiter Power is than the target's Jupiter Resistance. The difference between the user's Jupiter Power and the target's Jupiter Resistance is divided by 400, then 1 is added to this, resulting in what can be called the "elemental damage multiplier". This number is what Wheeze's damage is multiplied by.

For example, if an Adept with an Attack rating of 300 and a Jupiter Power of 150 unleashes Wheeze on a monster with a defense of 120 and a Jupiter Resistance of 100:

Therefore, if Wheeze were to be unleashed under these circumstances it would deal approximately 157 points of damage. 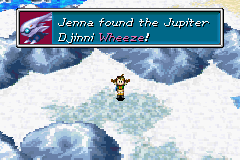 Wheeze is randomly found and fought in the western area of Tundaria, southwest of Tundaria Tower.

Golden Sun: The Lost Age: Wheeze is a Djinni that is randomly encountered in a specific area of the overworld that otherwise appears to be pointless scenery. Thus, it is almost always missed by players playing the game the first time without any outside information. The battle with Wheeze may ensue in place of a random battle in the pictured area that is the southwest-most explorable area of the continent of Tundaria, directly southwest of Tundaria Tower. See here for enemy statistics.

General: Wheeze is a pretty good Jupiter-aligned member in the attacking Djinn hierarchy. It boasts a solid 50 set damage bonus and a chance to inflict the potent Deadly Poison / Venom status condition. While this condition can make damage pile up heavily on enemies over short amounts of time, it won't work on most bosses due to them having high Luck ratings, but that applies to other status conditions as well.

Golden Sun: The Lost Age: Wheeze is basically a somewhat less damaging Jupiter variation on the first game's Venus Djinni Bane, and it can be put to good use due to being found around the middle of the game. Both Djinn suffer a lack of very viable targets of deadly poison in this game, however; in the first game, Bane at least could be used to great effect against the last three floors worth of mini-bosses in Crossbone Isle. Compared to other Jupiter Djinn found before and after it, Wheeze has 10 more damage than Waft, which has a roughly equally useful Sleep status condition chance, as well as 10 more damage than Whorl, found in Jupiter Lighthouse, which has a chance to inflict instant death. In point of fact, instant death is more preferable to a powerful poison that merely brings an enemy to its death faster, so while Wheeze ends up doing a little more physical damage, Whorl may end up obsoleting it as one of the best attacking Jupiter Djinn.

A wheeze is a continuous, coarse, whistling sound produced in the respiratory airways during breathing, which is relevant to the air-based Djinn. The sound is associated with sicknesses such as lung disease or asthma, which is fitting because it has a poisoning effect.