When Tonic is unleashed in battle, all status ailments on each currently active party member that is not Downed are removed. This includes the conditions that would disappear at the end of each battle, including Stun, Delusion, Sleep, Psynergy Seals, and Death Curse, and permanent conditions that would have to be removed manually, including Poison, Venom, and Haunt.

In Golden Sun and The Lost Age, Tonic's unleash animation visually resembles a transparent blue image of a Mercury Djinni hovering above the party as an array of blue sparkles swivel around each Adept in order. 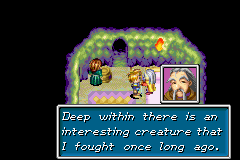 After defeating Toadonpa in the Lunpa Fortress sidequest, return to Lunpa Fortress to where Donpa is and he'll allow you into his storage room where Tonic is.

Golden Sun: Tonic is located in Lunpa Fortress, in a room connected to Donpa's bedroom that is inaccessible the first time you sneak into and complete the optional dungeon. After defeating Toadonpa and letting Hammet be brought back to Kalay, you are allowed to sneak back into Lunpa Fortress. Make your way all the way back to Donpa's bedroom again, and in a cutscene Donpa will thank you for your help and let you enter a room to collect Tonic, which he claims is a creature he "fought once long ago" - this seems to contradict the main plot in that the Djinn were only released into the world for the first time at the beginning of the game, though it is possible Donpa encountered Tonic as soon as it was released and that it was "long" since then in his perspective.

Golden Sun: The Lost Age: If players don't transfer data from Golden Sun to The Lost Age, Tonic will not be among the Djinn Isaac's party has with them when they join forces with Felix's party late in the game. In this case, Tonic may be found as the "make-up" Mercury Djinni at the lone northern house in Prox.

General: The effect of curing all status ailments, let alone on all currently active Adepts in the battle, is exclusive to Djinn like Tonic. In one maneuver, it removes from across the entire battling party all occurrences of the status conditions that the Elixir item and Restore Psynergy remove off a single targeted ally (Sleep, Stun, Delusion, Psynergy Seal, and Death Curse), the damaging status conditions that the Antidote item and Cure Poison Psynergy remove off a single targeted ally (Poison and Venom), and the Haunt status condition that can otherwise only be removed either by the afflicted ally being Downed or by paying at a Sanctum. This makes Djinn like Tonic conceptually invaluable, though there seem to be few real combat situations where such a healing effect can truly be worth it - temporary status conditions are not extremely dangerous because battles go by fast anyway and they remove themselves once the battle is over, and when anyone is poisoned during a battle, it is typical to win the battle quickly, and then use Cure Poison on each poisoned Adept in the field. The Haunt condition does not even apply itself much to be of real worry in general as well. Effects like Tonic are most useful in particular boss encounters when various status conditions are spread around a lot, particularly if you are setting up for a Mercury summon in that battle. Identical equivalents to this Djinni in Dark Dawn are the Mercury Djinni Dewdrop and the Venus Djinni Clover.

Golden Sun: As Tonic is the only Djinni in this game with this particular mass-status-condition-removing effect, it is the only effect of this sort that the party has access to. There are few opportunities for Tonic to be truly useful though, because of the issues outlined above. The biggest opportunity Tonic has to be useful is in the final boss battle, where both Venom and Haunt get easily spread across the party, and summons are a good thing to set up and let loose because they deal massive amounts of damage to bosses with massive amounts of HP.

Golden Sun: The Lost Age: When Isaac's party joins Felix's party along with their returning Djinn (granted that Password data transfer is in effect), Tonic's battle ability makes it a second Salt, a Venus Djinni acquirable in Contigo as soon as that game's party enters the Great Western Sea. The two are equally usable for whenever a particularly widespread status condition situation transpires, though in a way they are limited because those sorts of situations do not occur often; the only real beneficial use for them in this game is when multiple Adepts are afflicted with Haunt and Death Curse in the fights against the final boss and Dullahan.

A tonic is a drink intended to restore or invigorate, hence the reason the Djinni Tonic cures status conditions.

Mint is an aromatic herb used as medicine or spice.