Mist (ミルキー Milky) is a Mercury Djinni found throughout the Golden Sun series. 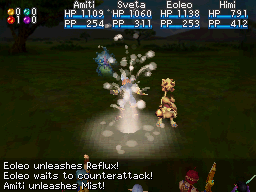 "Attack and lull a foe into deep sleep." ~Dark Dawn

When Set, Mist increases its Adept's base HP by 11 and base Attack by 4.

When Mist is unleashed in battle, the user deals a Mercury-based attack equal in power to the user's normal physical attack multiplied by 1.3. Then there is a chance that the target's will be inflicted with the Sleep status condition.

In Golden Sun and The Lost Age, Mist's unleash animation visually resembles the user performing a normal attack, but stopping in place before the strike while a light blue image of a Mercury Djinni forms above the user and gathers blue energy orbs into itself. Then the image disappears into the strike, and a white cloud is let loose on impact. In Dark Dawn, the user summons the 3D model of Mist above the enemy, who floats above the enemy shortly, and then a white water drop drops onto the ground at the enemy's feet quickly and makes a white splash, and then a small light-blue sphere briefly forms and disappears at the enemy's chest area.

Mist's attack then takes this base damage value and uses it in the following equation:

For example, if an Adept with an Attack rating of 120 and a Mercury Power of 120 unleashes Mist on a monster with a defense of 40 and a Mercury Resistance of 70:

Therefore, if Mist were to be unleashed under these circumstances it would deal approximately 58 points of damage. 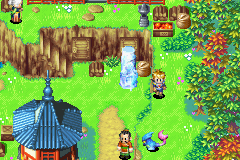 Having just reached Mist on its ledge in Xian.

Golden Sun: Mist is visibly located in the town of Xian. To get to it, note a woman that patrols between the river and the right of two brown doors embedded into a brown wall below the town's dojo. As soon as you talk to her, a Frostable puddle appears beneath her, and she berates you for making her drop her bucket of water. Talk to her when there is one tile between herself and the door she stops in front of, and use Frost on the resultant puddle to form a pillar you can hop across to reach the Djinni to the right.

Golden Sun: The Lost Age: Players can transfer data from Golden Sun to The Lost Age, but even if they don't, Mist will be among the Djinn Isaac's party has with them when they join forces with Felix's party late in the game. 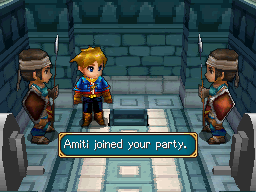 Mist is automatically acquired when Amiti permanently joins the party outside the exit within Ayuthay out of its underground portion.

Golden Sun: Dark Dawn: Mist is one of the three Mercury Djinn that Amiti carries along with him when he permanently joins the party following the completion of Barai Temple and when going out of Ayuthay's underground region. The other two are Mellow and Claw.

General: Mist is generally the first attacking Mercury Djinni seen in each of the games it appears in with a damage multiplier, though x1.3 is not a strong multiplier. This will make its damage not overly impressive even when used by an Adept with a high attack rating, unless it is at the end of the game when the party is very highly leveled and equipped with the best weapons. But of course, the player would most likely have found other Djinn with better multipliers to work with by then, making Mist obsolete in this scenario. What ultimately gives it value as an okay attacking Djinni is its chance to inflict the useful Sleep status condition. 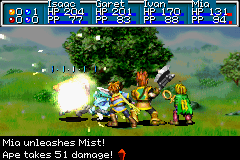 Golden Sun: Mist has the highest damage potential of the three available offensive Mercury Djinn. Since its damage enhancement takes the form of a multiplier, it will deal more destruction the higher leveled the user is. It might be best used in a party without mono-elemental classes because the Mercury Adept, Mia, is generally designated as a medic and her physical attack isn't as high as Isaac's, so Mist may be "wasted" on her despite it being her potentially strongest single-target offense.

Golden Sun: The Lost Age: When Isaac's party joins Felix's party along with their returning Djinn, Mist is used less because its damage multiplier is outperformed by two other Mercury Djinn, Sour and Gel, which both have a 50% damage increase, and when used by the more offense-oriented Mercury Adept, Piers, one would typically want the greater overall damage output of those two. One must take into account, though, that Sour's secondary effect drops all of the target's resistances by 40, and Gel's drops the target's Attack by 25%. Depending on your taste, Sleep being a more crippling effect to the target may make Mist roughly equal to Sour and Gel despite dealing less immediate damage.

Golden Sun: Dark Dawn: Mist's usefulness in this game is far more suspect from the start because the Mercury Djinni Claw, the other attacking Mercury Djinni that Amiti brings with him when he joins your party, is identical to the previous game's Sour - it has a x1.5 damage multiplier and may lower all the target's resistances by 40 each. Competition between Mist and Claw therefore occurs all throughout the game rather than late in it, and the higher damage multiplier and resistance-lowering effect of Claw may make that more preferable as an attacking Djinni. Once again Mist attempts to distinguish itself with its chance to render an enemy unable to do anything while in Sleep.

Mist is water vapor in the air that sometimes blocks visibility, and "milky" is an adjective describing a liquid filled with particles that obscure vision, usually of milk-like color. The name may also just refer to milk, the dairy drink, which also makes sense because drinking milk increases serotonin levels, inducing sleepiness.