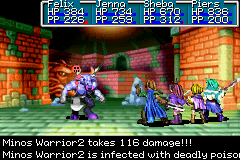 Downed
The equivalent of being unconscious. A Downed character cannot do anything, including receive experience points. Typically, this is reached only when a character hits 0 HP; monsters die when they reach this point (although creatures in the Phoenix enemy line are capable of bringing them back). Exceptions include certain unleashed weapon effects (e.g. Crystal Rod) and the Condemn Psynergy. Water of Life, certain Djinn (e.g. Quartz, Tinder, Dew, etc.), and the Revive Psynergy can remove this condition.
Poison/Venom
These two effects are identical in function; the only difference between them is their strength. Poison causes the afflicted to lose some HP after they attack; Venom (also referred to as Deadly Poison) causes them to lose a lot of HP. Cure Poison, the Unicorn Ring, the Djinn Tonic and Salt, and Antidote can remove this condition. If an enemy loses the last of its HP due to poison or venom, the message: "(Enemy)'s strength was exhausted!" appears and the enemy dies.
Equipment Curse
See also; Cursed item
This effect is rather unique, as it is caused by equipment. Certain pieces of equipment have a curse on them; this curse means that the wielder cannot remove the equipment once equipped, and they will on occasion lose the ability to move when it comes their turn to attack. The equipment's paralysis effect can be nullified by giving the wielder the Cleric's Ring; however, the equipment itself can only be removed at a Sanctum.
Haunt
The rough equivalent of being possessed, Haunt causes a ghost or demon to follow the afflicted around, taking the appearance of a ghostly spirit circling them. Whenever someone afflicted with Haunt deals damage, they have a 25% chance to take damage equal to 25% of the damage dealt. Haunts can be especially deadly if the Haunted character has low HP and deals a large amount of damage; this may well be enough to Down them. Haunts can be removed at a Sanctum, as well as by the Djinn Tonic and Salt.