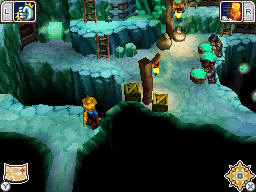 An indoor segment of Passaj Mountain Climb, in which miners from Passaj harvest the floating ore Zol.

Zol (ボーロ Vohlo) is a special green-coloured alloy in Golden Sun: Dark Dawn that is mostly associated with the Jupiter element and responses to even minimal currents of wind. In most dungeons, there are some platforms and cubes that can be lifted for a short period with the Whirlwind Psynergy.

It can come in the form of a new forgeable material named Quality Zol (こうじゅんどボーロ High Purity Vohlo), which can be forged by Obaba into potent pieces of equipment. It can be bought for 800 coins and sold for 600 coins.

Zol is said to be available throughout the Ei-Jei region of Angara, with a large mine located near the town of Passaj. When melted down, Zol gives off a green-colored gas, that is lighter than air. This property was heavily exploited by the Jenei and Exathi. The two peoples came together to build the Alchemy Forge, which uses Mars based Psynergy to melt Zol to form a cloud passageway to the Jenei's home on Craggy Peak. Today, miners use Zol's floating properties to easily transport Zol from their mines to the town of Passaj, where it is forged by Passaj's master craftsmen.

A limitless supply of Quality Zol is dropped by the Sky Dragons of Warrior's Hill. Sky Dragons normally drop Quality Zol once out of every 128 times, but the odds can be increased to 1/32 if it is killed with a Jupiter Djinni.

Quality Zol can also be found in the following locations:

Air Bangle: Bracelet class: Defense +39: Jupiter power +30. It is bought for 6000 coins and sold for 4500 coins. Note: Though being a bracelet-class item, it is equippable by all eight Adepts.

The items forged from Quality Zol are fairly useful for endgame purposes. While the overall offensive and defensive power tends to fall behind equipment forged from Mythril Silver and Orihalcon, Quality Zol-forged items grant useful bonuses that help make up for their slightly lesser power. The Verdant Sword is an excellent endgame choice for Karis, due to its status as a Jupiter-based pure element weapon. The Zol Ring and the Hover Greave provide the highest and second highest bonuses to Agility in the game, making even the slowest Adept capable of hitting first. The Air Bangle provides a bonus to Jupiter Power, and thus is useful for any Adept using Jupiter-based offenses. The Zol Tiara, while limited to female Adepts, is the strongest, non-cursed circlet, and thus can be useful for either Karis or Himi, while providing a useful bonus to resistance.