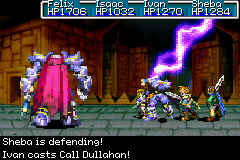 The Call Dullahan Psynergy being used against the real Dullahan in Anemos Inner Sanctum.

The Call Psynergy series is a series of Mercury, Venus, and Jupiter Psynergies introduced in Golden Sun: The Lost Age. Call Dullahan, the strongest Psynergy in the series, is noteworthy for having the highest damage multiplier of any Psynergy in the Golden Sun series.

Call Zombie, Call Demon, and Call Dullahan are single-target, offensive Psynergies. The offensive power of Call Zombie is determined by comparing the user's Mercury Power and the target's Mercury Resistance, and multiplying the resultant ratio by the base power of Call Zombie. Call Demon and Call Dullahan are Attack-dependent, meaning characters with higher Attack ratings will deal more damage with these attacks. In addition, the caster's Venus or Jupiter Power and the target's Defense and Venus or Jupiter Resistance all factor into the damage dealt.

Visually, each stage of the series features a monster being summoned to attack the target in place of the caster. Call Zombie shows a Zombie performing its standard Attack. Call Demon shows a Red Demon using its signature move Vital Moon. Call Dullahan features a dullahan (a different one than the infamous boss) attacking the target with its signature move, Formina Sage.

Elemental Power attacks such as Call Zombie use a set base power as the base damage to be modified. For example, the base power of Call Zombie is 40. Thus, an unmodified Call Zombie would do around 40 points of damage.

Attacks from Call Zombie take this base damage value and uses it in the following equation:

To word this in prose, Call Zombie takes the base damage of the particular attack, and then modifies it by how much higher or lower the user's Mercury Power is than the target's Mercury Resistance. The difference between the user's Mercury Power and the target's Mercury Resistance is then divided by 200, then 1 is added to this, resulting in what can be called the "elemental damage multiplier". This number is what the Psynergies' damage is multiplied by.

Therefore, a Call Zombie cast under these circumstances would deal approximately 60 points of damage to the targeted enemy.

As previously stated, there are several factors determining the damage dealt by Psynergies like Call Demon and Call Dullahan. The exact damage calculation formula for these attacks can be represented with the following two equations:

This formula is identical to the formula used to determine the damage dealt by standard physical attacks. In other words, base damage is half of the difference between the caster's Attack and the target's Defense. If this number falls below zero, it is automatically reset to zero.

This is the base damage. Call Dullahan then uses this value for another equation:

Power and Resistance are used to determine the multiplier applied to this new base damage. The target's Resistance is subtracted from the caster's Power, the difference is divided by 100, and the result is added to 1 before being multiplied by the base damage. As a result, the damage dealt by these attacks can, theoretically, vary from roughly 50% to 150% of a normal physical attack. Finally, the damage total is multiplied by a specified amount. Call Dullahan, for example, multiplies the total potential damage of the attack by 3.

Call Demon works similarly, but uses Venus Power and Resistance instead of Jupiter. In addition, the damage calculation is ignored should Call Demon's side effect activate, in which case the target's HP will be instantly reduced to 1.

Therefore, a Call Dullahan cast under these circumstances would deal approximately 750 points of damage.

General: The Call series is one of the most important series in the Dark Mage's repertoire. Despite the Dark Mage's below-average Attack stat, Call Demon and Call Dullahan have high enough damage multipliers for any Adept to do high amounts of damage. Call Zombie is a decently strong option for early parts of the game, but is quickly outclassed. When learned, Call Demon is useful during mid-game both for its high damage multiplier, and for its occasional chance to reduce a target's HP to a single point. Call Dullahan is likely the single-most powerful Psynergy in the series, and will do large amounts of damage no matter which Adept uses it.

Golden Sun: The Lost Age: Call Zombie will see little use due to the fact that the class is not available until mid-game. Call Demon will do decent damage against most bosses in the Eastern Sea through Jupiter Lighthouse, barring the Serpent, which is highly resistant to Venus. Call Dullahan is useful against nearly every endgame boss, due to its high damage multiplier. Combining it with a 99%-Unleash Sol Blade user will decimate most opponents. In particular, the final boss and Dullahan both have weaknesses to Call Dullahan's Jupiter alignment.