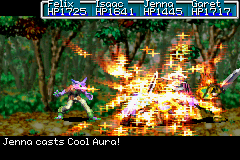 Cool Aura as shown in The Lost Age, being cast by Jenna.

Aura (オーラ, Aura), Healing Aura (ヒールオーラ, Heal Aura), and Cool Aura (クリアオーラ, Clear Aura) are a series of Mars Support-class Psynergies featured in Golden Sun: The Lost Age. The Aura Psynergies are similar in function to the Mercury-based Wish Psynergy series, with the main differences being elemental alignment and the degree of HP restoration.

The Aura Psynergies restore Hit Points to all party members that haven't fallen; if used during battle, they only affect currently-battling party members. The amount of HP recovered depends on the caster's Mars Power, as well as which Psynergy is actually used.

As previously stated, the exact strength of the Aura Psynergies depend on the caster's Mars Power. To be specific, the outcome can be represented with the following formula:

The caster's Mars Power is divided by 100 and multiplied by the base HP restored; the Power rating is effectively treated as an exact percentage. As a result, an Adept with less than 100 Mars Power would heal less than the advertised amount of HP, while an Adept with more than 100 Mars Power would heal more. If an Adept has 124 Mars Power, the Psynergy literally heals 24% more than what is listed in the game. The highest any Power rating can reach is 200, so if the user has 200 Mars Power, the healing potency of all stages of the Aura series is doubled.

In terms of playable characters, the Aura series is available only to the Flame User class series, specifically to the stages of Hex and above. Thus, the series is unique to the Mars Adept Jenna. In order to gain access to this series, Jenna must have at least four Mars Djinn set, and may not have Djinn of any other element set. Aura is learned at level 9, Healing Aura at level 16, and Cool Aura at level 33.

General: When compared to the two other mass-healing Psynergies that are available at various points throughout the games, the Aura series is weaker than the Wish Psynergy series but stronger than the Fresh Breeze Psynergy series. Similar trends follow in terms of PP required and levels learned. In general, it is the least efficient of the three. However, the Aura series can still be useful in certain situations, though it competes heavily with the Wish series.

Golden Sun: The Lost Age: The Aura series generally becomes available prior to the battle against the Aqua Hydra. If the player keeps their Adepts in their respective base classes, Aura remains the only mass-healing move available until Mia joins the party in Contigo. The main drawback is that there are situations in which the player may need Jenna more as an attacker than as a healer, such as during the boss battles against the Aqua Hydra and Poseidon, both of which have low Mars Resistance. In these cases, players may choose to arrange Djinn to give another Adept access to the Wish series. The Aura series is most useful against Mars-based enemies such as Karst and Agatio, the Avimander, and the Flame Dragons. In these cases, the player would want their Mercury Adepts attacking, thus allowing Jenna to step in as a healer. At higher levels, however, most players would likely prefer the more powerful Wish series over the Aura series.

Golden Sun: The Lost Age: The second stage of the series, Healing Aura, is used by two enemies: Karst atop Jupiter Lighthouse, and the smaller of the Flame Dragons in Mars Lighthouse. The addition of Healing Aura to their arsenals is meant to remedy an unusual situation that occurred in the original Golden Sun, where the Mars Adept Menardi used the Mercury-based Wish due to the lack of Mars-based healing methods.