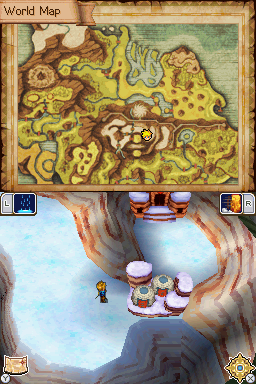 Te Rya Village's current location as of Dark Dawn is in the Khiren Mountains. 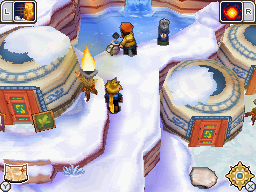 Te Rya is a nomadic tent village that has just settled near a routine Khiren Water-harvesting operation.

Te Rya is located in the Khiren Highlands, a snowy area in central Angara, and is nearly completely enclosed by the Khiren Mountains. The village was founded by a group of nomadic farmers, so the village's houses are designed to be easily moved to allow the farmers to easily follow the sheep and goats they herd. The inhabitants constantly keep themselves warm through the heat coming from the torches located around the village. The village is also a source of free-flowing Khiren Water.

Travel to and from the city is limited. While the Teppe Ruins to the north serve as a passage to Morgal, the ruins are crumbling, making travel difficult for non-Adepts. However, Adepts can also travel to the village from the south, via the Clouds of Passaj.

After the events of the Morgal Revolution, the Sanan royal Ryu Kou, alongside his mentor Hou Zan seek Te Rya as a place of refuge alongside other Sanan citizens. They offer to watch the gate of the town in exchange for permission to stay there. One day, Ryu Kou encounters a group of travelers, Matthew and his party, who seek to enter the town. Ryu Kou refuses to allow them to enter, due to fears that the group are Morgal spies. Tyrell soon realizes that Ryu Kou is not a local, but Ryu Kou refuses to discuss the matter. Eventually, Hou Zan forcefully makes Ryu Kou give the group entry. 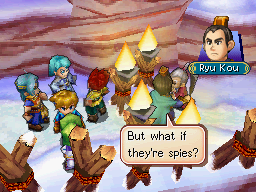 While exploring the town, Matthew occasionally notices a shadowy figure, though none of the citizens appear to notice. In one house, Matthew overhears a conversation between and man and woman; the woman had been searching for a bag belonging to a girl named Hou Ju. At her request, Matthew agrees to alert her if he finds it. Later, Matthew enters another house, where he finds two injured mercenaries. Before Matthew can investigate further, Hou Zan and Ryu Kou arrive. The two men explain that they cannot allow Matthew's group to roam freely, and ask where they intend to go. Hou Zan realizes that Matthew's party is made up of Adepts, and tells them of the Teppe Ruins, which will allow the group to continue to their destination in Morgal.

Matthew's group explores the ruins, but come to a dead end. Fortunately, they meet Sveta, who had been following them earlier. She offers her services as a guide, but asks that they return the bag she had found earlier. Being a beastman, she would risk being attacked if she tried to approach the Sanans herself.

Matthew's group returns to Te Rya and presents the bag to Ryu Kou and the other Sanans. Realizing that Matthew's group is trustworthy, Ryu Kou tells the Adepts of their situation. Hou Ju, Ryu Kou's sister, had been captured by Morgal forces and was being imprisoned despite her innocence. The bag had contained several of her belongings, which Ryu Kou hoped to return to her. Meanwhile, one of the Sanans notices something in the bag. When Matthew's party prepares to return to the Teppe Ruins, they notice Ryu Kou, Hou Zan, and several others prepare to leave the village.

Te Rya's inn is located in the southeast portion of the village and costs 10 coins per party member. 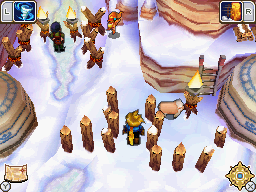 Lighting a torch will cause the sheep to move, allowing the player to reach Fury.

Mars Djinni Fury: Located on a ridge in town. The path to the Djinni is initially blocked by a sheep.

Apple: A pot in the northern house.

Nurse's Cap: Enter the nearby house to the Mars Djinn (where two people are talking about Hou Ju's Bag) and check the drawer.