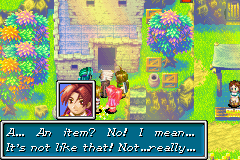 A sprite coloration and accompanying text that would cleave a fanbase into equivalent halves.

Shipping is a term used by various fan communities, the Golden Sun community among them, to describe fan fiction that emphasizes romantic elements of relationship between the various characters of the series. (Shipping is short for relationship) Various ships are popular in the Golden Sun fan fiction community. The original shipping list was created by Golden Sun fanfiction author Isaac says Booga. Additions were made by other fans who would write different pairings and coin names for them.

The Golden Sun series is rather well known for its extensive shipping scene. On the TVTropes wiki, Golden Sun is listed as an example series in its article about shipping because seemingly every character in Golden Sun is involved in a named pairing with every other character. Some of the shipping pairings are described as "extremely unrealistic and impractical...just to parody the rest of the shipping," with Garet's Magmashipping cited as an example. The article on crack pairings also has an entry on Golden Sun.

The following lists attempts to document shipping terms that have been established as terms used in fanfiction discussion in Golden Sun community boards. The ships listed are grouped and arranged by male characters. Listed with various ship name is a link to a fan fiction that either generated the name of the ship or that is a good representative example of the ship.