Lady Layana (ラヤナ Layana) is the wife of the merchant Master Hammet, founder of Kalay. She is also a foster mother to Ivan, who Hammet agreed to care for. Scenes featuring her in Golden Sun show her to be a sensible woman who is capable of keeping Kalay running while her husband is held captive in Lunpa. She cares deeply for Hammet and Ivan, but she does not let emotions get in the way of common sense.

Prior to the events of Golden Sun, Layana was living in Kalay with her husband, Master Hammet, and their adopted son Ivan, whom Hammet had agreed to raise and assist in the fulfillment of a prophesy in order to repay a Jupiter Adept that saved his life and gave him business advice. Hammet had shared all this information will Layana as well as the importance of the Shaman's Rod.

The Storm on Mt. Aleph[edit]

While Hammet was searching for the object he was supposed to obtain with the Shaman's Rod, a storm suddenly struck Mt. Aleph. The prophesy foretold that Ivan would set out with warriors from Vale three years after such a storm. Hammet, realizing the shortage of time, finally managed to unearth a clue as to the location of Hesperia, where he was told to take the Shaman's Rod, and left Kalay with Ivan and headed north to Vault, leaving Layana in Kalay. 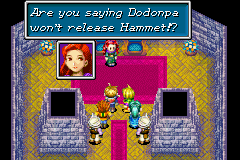 Layana gives a ransom to Dodonpa, but to no avail, as Hammet is not released.

While Hammet was away, Mt. Aleph erupted, destroying the bridge north of Kalay, trapping Hammet in Vault. Shortly after the eruption, presumably after the bridge was repaired, Layana receives a ransom note from Dodonpa who claims to have Hammet imprisoned in Lunpa. Layana immediately has the ransom prepared and sent to Lunpa, hoping for Hammet to be freed. As time passed though, there was no response from Dodonpa and Hammet hadn't returned. Despite this, Layana manages to keep the citizens of Kalay from hearing anything beyond rumors of Hammet's incarceration.

Then, as hope was all but lost, Ivan suddenly returned to Kalay, accompanied by Isaac, Garet, and Mia. Believing this to be a sign of Hammet's impending release, Layana and the servants of Kalay palace became hopeful. Unfortunately, Ivan revealed he had been separated from Hammet prior to his imprisonment and was unaware of his condition. Upon discussing what had transpired, it became clear that there was little chance that Dodonpa had any plans to release Hammet. Despite this, however, Layana is hesitant to order Kalay soldiers to attack Lunpa for fear of Hammet's life. When Garet suggests that their party could help, Layana declines their offer, letting slip her knowledge of their quest. Her secret uncovered, she revealed her knowledge of the purpose of Hammet's trip, the prophesy, and the source of Hammet's success as a merchant and encourages Isaac and company to press forward in their quest.

Despite Layana's refusal, Isaac's party can choose to return to Kalay and proceed to rescue Hammet from Lunpa. Hammet then receives a ride back to Kalay from Bunza. Upon returning to Kalay, Isaac and party find that the people of Kalay, outside of the palace, remain unaware of Hammet's recent imprisonment nor are aware of his return since he entered the palace through Kalay Tunnel. Layana, however, while pleased at Hammet's safe return, is very cross about Isaac putting Hammet before his own very important task. Ivan apologizes for their actions and agrees to leave immediately, to which Layana curtly accepts. Before leaving, Hammet tells the Adepts to take the Shaman's Rod to Hesperia, and Layana, despite her outward hostility, orders the treasuries to be opened to Isaac.

When the party first arrives in Kalay, Lady Layana offers much insight into Hammet and Ivan's past.
Layana: It happened several years before Hammet founded Kalay... He was off travelling. Hammet felt he had reached an impasse as a merchant then. He risked his life on a journey to find a new source of business... He was in mortal danger in the southwestern edge of the world, when some Adepts appeared and saved his life. He had lost consciousness. When he awoke, he found himself in their village.
Ivan: Just a moment, am I from that village?
Layana: Yes. The Adept gave him the Shaman's Rod and you... along with some doubloons.
Mia: Doubloons... Were they golden doubloons?
Layana: Yes... Let's see... You are ...called...
Mia: I am Mia, Lady Layana.
Layana: It was a lot of gold, Mia, but he also received some business advice.
Garet: business advice? Hammet? The greatest merchant ever known?
Layana: Yes, Garet, Hammet has the Adepts to thank for his success.
Guard: Wow.. I've never heard anything like that...
Layana: He was advised to buy silk in Xian and sell it in Tolbi. To see anything sell so well, it's like a dream come true. There's no denying that was when Hammet picked up his knack for business.
Ivan: Did he have to promise them anything in return?
Layana: Ah, yes, Ivan... it is something you will need on your journey.