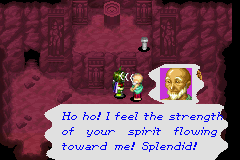 Master Poi will be one of the first new characters encountered in The Lost Age.

Master Poi (ピポイ Pipoi) is the master and leader of the monks at Kandorean Temple in northern Indra. He encourages the monks under his tutelage to attempt levitation and bestows the Psynergy Lash upon whomever completes the tasks and trials in the caves behind Kandorean Temple. Master Poi appears quite old, though his true age is unknown. Master Poi's role is similar to that of the masters of Fuchin Temple and Lama Temple in Angara.

Shortly after being washed onto Indra at the beginning of the game, Felix's party makes its way to the Kandorean Temple. Though it is locked, to allow the monks studying there to meditate in peace, the Adepts utilise their powers to locate a hidden passage in a wall to the west of the temple. This allows them to enter the complex and complete the test within, thereby obliging Master Poi to give them the Lash Pebble. Though he is surprised that someone other than his own monks was able to pass the test, he warms to Felix's group and does indeed hand over the item.

Although it is never confirmed as to whether he and his students are Adepts or simply something similar (such as Master Feh's Chi), Master Poi is nonetheless able to feel "spiritual power" and use Psynergy.